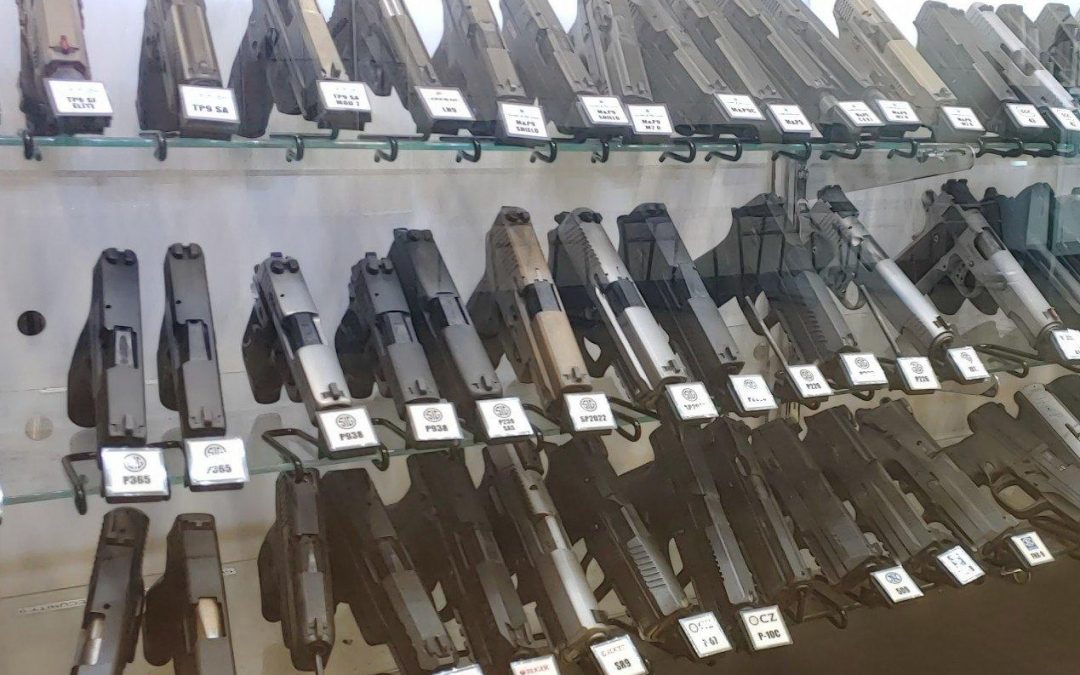 If you’re in the market for your first handgun, you may be feeling overwhelmed by all of the different available options. You also may not be entirely sure what terms like “caliber” mean or what the differences are between pistols and revolvers.

This guide will fill you in on everything you need to know to choose your first handgun confidently.

Choosing a handgun chambered in the right caliber for your needs and shooting ability is the most crucial decision you’ll need to make.

When we say “bullet,” we’re specifically referring to the projectile shot from a firearm, not the entire cartridge which includes the bullet, case, powder, and primer.

With very few exceptions, you can only safely shoot a particular caliber from a firearm chambered specifically for that caliber. For example, you can NOT shoot .40 S&W or .45 Auto from a pistol chambered in 9mm. You should always refer to the owners manual of your firearms to be sure what ammo can safely be shot from them. Failure to do so could result in the catastrophic failure of your gun and even severe injury to the shooter or bystanders.

In addition to differing bullet diameters, handgun calibers are loaded to different specifications from one another. 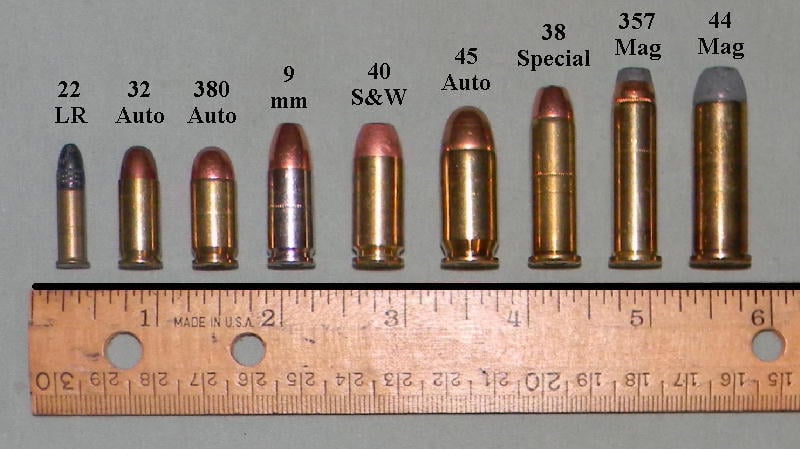 The most important factors to note are the mass of a bullet, measured in grains (gr), and the velocity it will travel. These factors play a tremendous role in both the “stopping power” and felt recoil of a given round.

There are hundreds of calibers that handguns have been or are still commonly chambered in today. To keep this guide concise, I’ll be focusing on the most popular options.

Among the most popular calibers, .22 Long Rifle (.22 LR) is the only one with rimfire cartridges.

Rimfire ammunition requires a gun’s firing pin to strike and crush the cartridge’s base to ignite the primer. Rimfire ammo has a very thin case which limits this type of ammunition to low-pressure loads.

By contrast, Centerfire ammunition has an external primer located at the base of the case head. 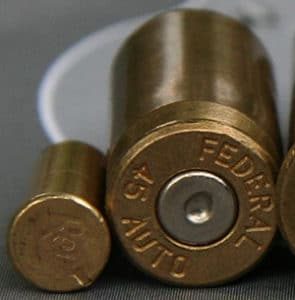 .22 Long Rifle most commonly has a bullet weight of 36 grains or 40 grains, yet a velocity roughly on par with the much heavier 9mm. Particularly for experienced shooters, it can feel like this caliber has almost no noticeable recoil.

This makes .22 LR pistols, revolvers, and rifles a excellent options for introducing children and new shooters to firearms. .22 LR ammo is also the cheapest available by a significant margin, making it a favorite caliber to shoot for even the most experienced shooters.

The downside to this caliber is that it has limited applications beyond just shooting for the sake of it. .22 LR can be used for hunting very small vermin but lacks the power to hunt larger animals.

While .22 Long Rifle can certainly be lethal to a human with a well-placed shot, it’s by no means remotely close to optimal for self-defense. For these purposes, .22 LR lacks sufficient power and is likely to fail to penetrate to the required depth needed to hit vital organs.

The most popular pistol calibers used for self-defense, including concealed carry, are:

Some also choose to use revolvers for self-defense which can be chambered in other popular calibers like .38 Special and .357 Magnum. 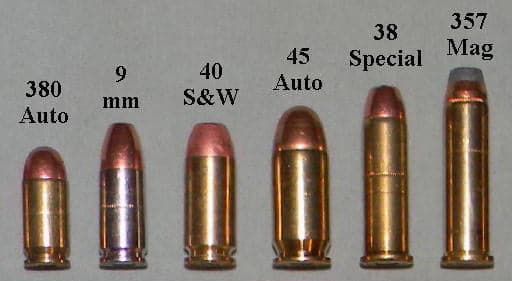 .380 Auto is the minimum viable caliber many would consider using for self-defense. Of the options I’ll cover, it has the lightest bullets (most commonly 90 grain or 95 grain) and a velocity usually slower than 9mm.

This makes it easy to shoot, having minimal recoil compared to larger calibers. Nearly all non-disabled adult shooters should be able to shoot it comfortably.

The small size of the cartridge also allows firearm manufacturers to make some extremely small pocket-sized pistols chambered in .380 Auto. 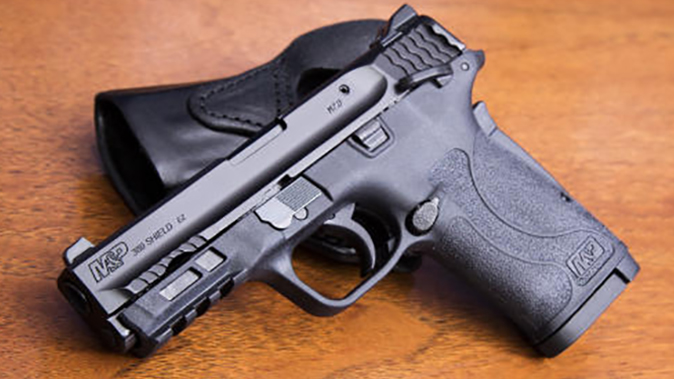 The negative to .380 Auto’s lack of power is that it performs worse than larger calibers in important metrics during ballistic gel testing. It’s common for this caliber to underpenetrate recommended depths of 12″-18″ and most loads have very poor bullet expansion compared to hollow point ammunition in larger calibers.

With that said, any gun is better than no gun if you need it for self-defense, so .380 Auto can be considered if you can’t handle larger calibers.

9mm is the most popular handgun caliber commonly recommended for self-defense use.

It’s the caliber of standard issued sidearms in the U.S. military, as well as all NATO forces. Though larger calibers were popular among local and federal law enforcement over the last 30+ years, many have switched to 9mm in recent years (if they weren’t already using it).

Recently, the FBI switched from .40 S&W to 9mm after ballistic testing and studying the performance of officers with different calibers. They found that the design of modern 9mm ammunition reduced the gap in ballistic tests when comparing it to larger calibers. Participants in their study also shot faster and more accurately with 9mm pistols compared to .40 S&W pistols. Lastly, they cited the larger magazine capacity of 9mm pistols as a significant benefit compared to pistols chambered in larger calibers.

9mm is a fantastic choice for a self-defense pistol. Even if you feel comfortable shooting larger calibers, you may find that you’re meaningfully faster with 9mm when doing drills.

With bullets weights most commonly being 115 gr, 124 gr, and 147 gr, combined with velocity in a similar range to the heavier .40 S&W, most people will find that they can comfortably shoot 9mm. 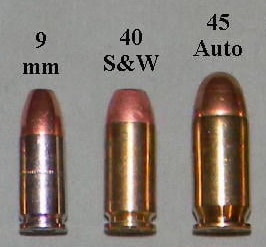 The heavier bullets of both .40 S&W and .45 Auto typically produce more energy than 9mm.

Though an argument can be made that this increases their “stopping power” compared to 9mm, it also results in greater felt recoil that can decrease your ability to perform with these calibers. Because of this, new or weaker shooters may also feel uncomfortable shootings pistols chambered in these calibers.

If you’re an experienced shooter or feel that you perform just as well with .40 S&W or .45 Auto, then, by all means, get a pistol chambered in one of these calibers. However, I’d generally recommend 9mm for people looking for their first pistol to use for self-defense.

Another decision you’ll have to make is what type of handgun to buy. The two major options are revolvers and pistols.

Today, most people opt for pistols for the increased capacity they offer. When comparing two very compact handguns from each group, the Colt Cobra (revolver) and Glock 26 Subcompact (pistol), the Glock pistol can hold 4 additional rounds in its magazine compared to the cobra’s cylinder.

Most revolvers only hold 6 rounds, so the difference in capacity becomes even more significant when you start looking at larger handguns. The full-size Glock 19, for example, has a standard magazine capacity of 17 rounds.

Revolvers do have a major benefit of being incredibly simplistic. Thanks to their simple design, handling malfunction can often be as simple as pulling the trigger again.

Though I wouldn’t carry a revolver for everyday carry chambered in calibers like .38 Special, revolvers do have their place. Larger caliber revolvers are a great option for protection against large animals when hiking or camping.

Handgun manufacturers make handguns in a variety of sizes.

Full-size handguns are often more comfortable to shoot because you can easily get a full grip on them. Though most modern handguns aren’t heavy, the extra weight of full-sized handguns can significantly reduce felt recoil. Remember though, larger handguns are more difficult to conceal, so they’re unlikely to be a great option if you plan to concealed carry.

In the picture below, you can see two SIG Sauer pistols I own. The larger of the two (P320 RX) is one of my favorite guns to shoot at the range and a great choice for home defense, but I carry the much smaller (P365). (If you’re wondering what’s mounted to both pistols, each of them has a pistol light attached.) 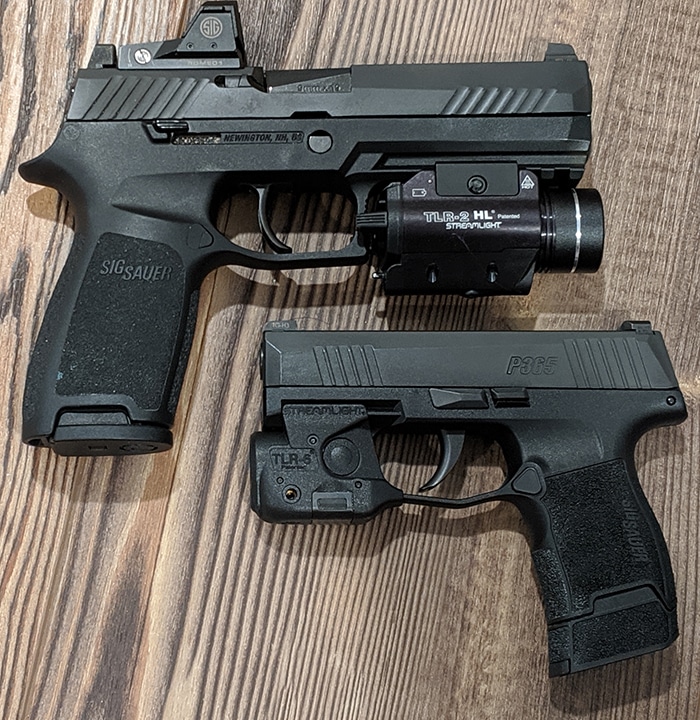 The smaller P365 is a bit more challenging to get a good grip on and it holds 5 less rounds (12 vs 17), but I accept these tradeoffs because it’s comfortable and easy to conceal in a holster.

Keep in mind, these two handguns are at opposite ends of the spectrum. You can find plenty of handguns sized between these.

Now that you have some idea of what to consider when buying your first handgun, the next step is to head to your local range and find what’s right for you.

Think about the reasons you’re buying a handgun before you get there, so the staff can help point you in the right direction. Many gun ranges have rentals available so you can try different options and see what feels best to you.

Once you own your first handgun, be sure to familiarize yourself with it and regularly practice at the range!

At Eagle Gun Range you can rent any handgun for $5.00

You will need to purchase ammunition with your rental gun. This will allow you to try out many different options before you decide which handgun is right for you.On Ladies Day, ladies can rent lanes for $5 and handguns for Free with ammunition purchase.  Ladies Day is all day Tuesday every week.

This article first appeared on GunPros.