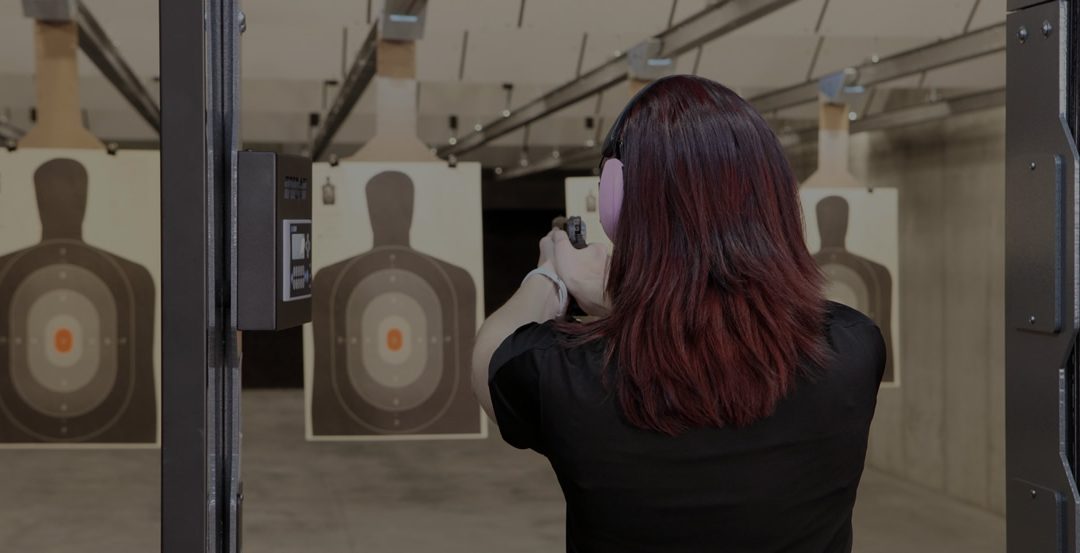 When you first start practicing with a handgun, the oft-heard instruction for defensive shooting is “aim center mass.” This is good advice for someone who knows nothing about armed defense and who will likely never seek training for and never practice for armed defense. Beyond this limited context, however, it is poor advice.

The purpose of defending with a handgun is to stop the threat. This is specific: to stop it—to make it cease to be a threat. In the case of human threats, this means to render the individual(s) incapable of continuing to be a threat. Context is everything, so “stopping the threat” may be as simple as deploying your firearm in a compelling manner and issuing compelling verbal commands for the individual(s) to cease and desist. At the other end of the spectrum is the requirement for accurate shots on target to stop the threat.

The specifics and totality of the context (and laws) may guide you in determining what level of force is appropriate, but it is the more violent end of the defensive spectrum that I want to deal with in this article. Specifically, we’re going to examine the few, small targets that when attacked with a handgun allow for a quick stop to threats. Again, they are specific and few and almost never are they accounted for when aiming center mass. 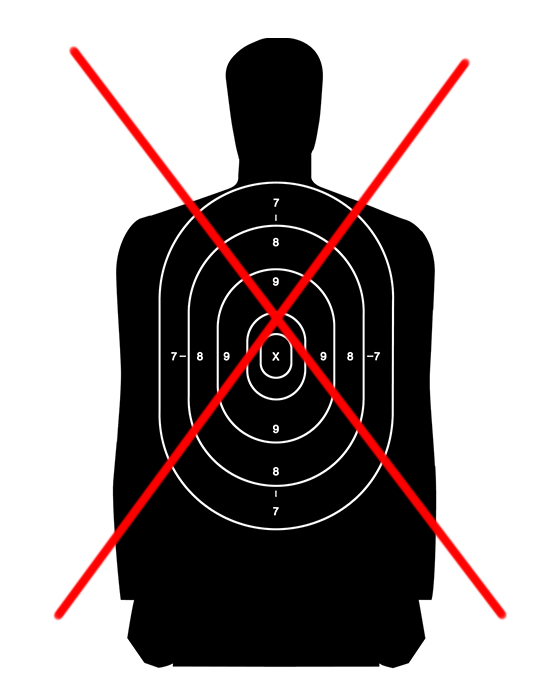 Above: Don’t use this target for your practice. Rather use one that does not focus on center mass, but instead has specific, effective target areas as outlined in this article – or – targets that are either simple outlines or are photorealistic and have no target areas defined (which makes for very good practice!).

It is important to understand that the context for this article is for handguns only. Rifles and shotguns introduce different contexts and I’m not going to deal with them here.

A handgun, generally, will put holes into people and animals. There are many handgun round calibers and slug types, but popular carry-handgun trauma characteristics are somewhat similar with regard to the specific and effective target areas of the human body. Rifle rounds, on the other hand, introduce far greater temporary-cavity trauma and generally put holes through people and animals. Shotguns, in addition to putting holes into people and animals have the added gruesome aspect of potentially taking chunks of anatomy off of the body, at close range.

Suffice it to say that we’re only going to deal with the most likely form of defensive targeting, which is that with a handgun.

If you put several rounds into an armed assailant’s center mass it may incapacitate or even kill him eventually, but real-life example after example demonstrates that he will likely suffer no diminishment or only mild diminishment of ability for minutes or even hours. In other words, you can shoot him in the belly and he can keep shooting at you or attacking you with a knife or with a crowbar for as long as it takes to kill you. “Center mass” will often do very little to stop the threat.

Serious trauma to the chest, even directly to the heart, has an unusually low mortality rate. One study noted that of 1109 patients with severe and puncturing trauma to the chest, only 18% died. Generally located defensive shots to the chest can be largely ineffective. Shoot a man in the left lung, he’s still got one good lung and another with diminished function. A lung shot is going to give the assailant a problem, but not immediately and it will seldom stop a determined assailant quickly; and then only if they decide to. Renowned instructor and self-defense legal expert Mas Ayoob said it quite well:

“The way to stop a criminal from shooting at you is to deliver your bullet to a part of the body he needs in order to keep shooting at you, and to make that part of his body stop working.”

In essence, you need to instantly turn the machine off. There are a couple of very good ways to do that; one is to traumatize the nervous system and the other is to traumatize the circulatory system. Again, neither of these is possible when you aim center mass with a handgun.

Attacking the circulatory system with a handgun in order to immediately stop a threat is not so easy as it might sound. True, any round you put into someone’s body will likely induce bleeding trauma, but most bleeding occurs too slowly to have any timely impact on the threat at hand. Effective attacks are possible at only a couple of small targets.

The heart is a primary circulatory target, but even to say “the heart” is to be far too imprecise for quickly stopping a threat. The large heart muscle can withstand quite a bit of trauma before it stops working well. Shooting someone in the heart will most likely not even kill them. As has been documented:

Though you’re not trying to kill anyone, your defensive aim is to immediately incapacitate. Rather than traumatizing muscle, incapacitation is best achieved by causing a quick and dramatic loss of blood pressure. This means attacking the upper venous and arterial structure of the heart. 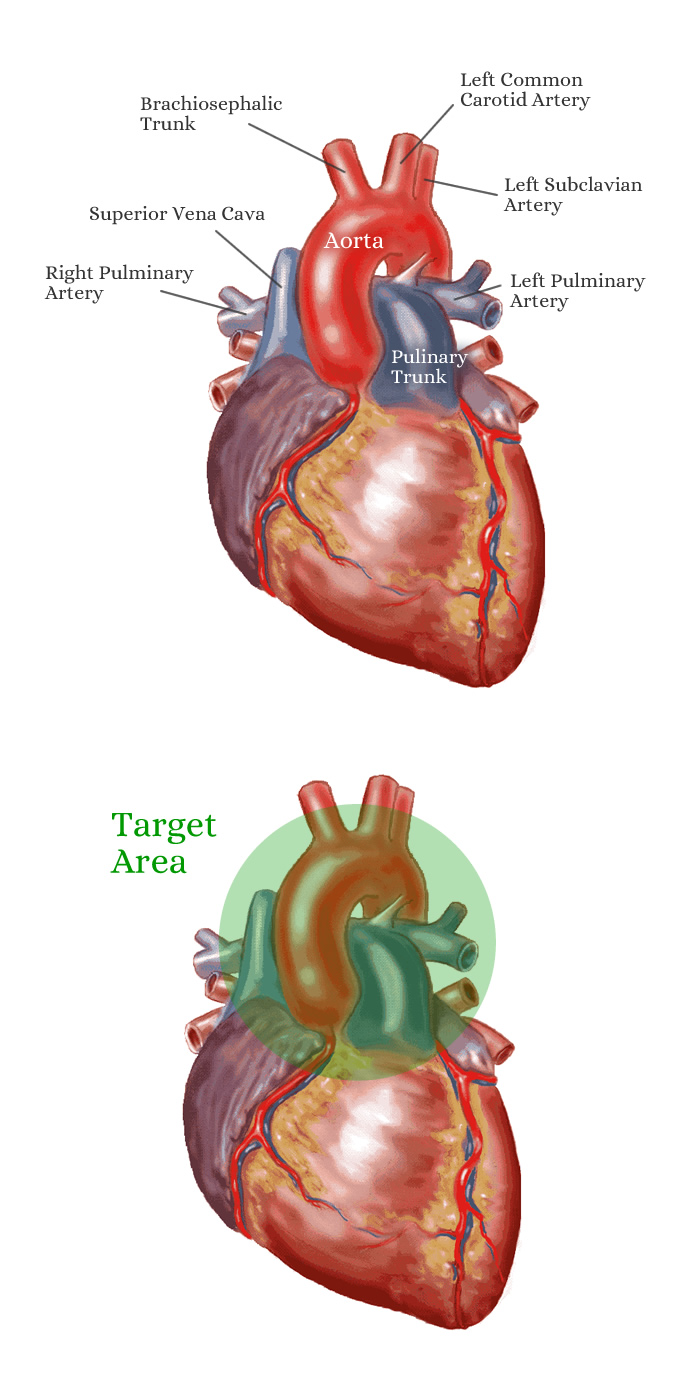 Trauma to this upper structure of the heart has the greatest chance of causing internal bleeding to the extent of causing a quick drop in blood pressure, greatly slowing down the assailant or causing loss of consciousness.

On a human male, the proper target area for the upper structure of the heart is located midway between the nipples and the clavicles, roughly in the midline, as you can see here: 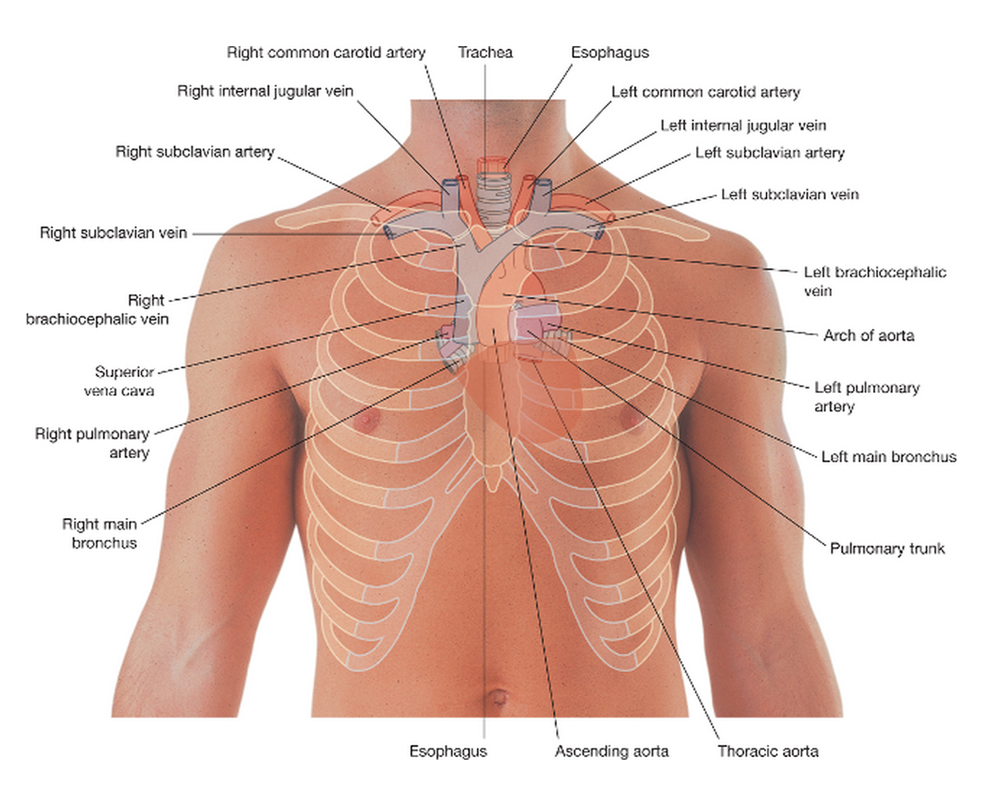 In your range training, do not aim for center mass and do not aim merely for the chest. Instead practice aiming and hitting this proper small target area exclusively. Regard anything else as a miss.

Trauma to the central nervous system can essentially turn off the machine, causing a sudden loss of consciousness and a corresponding stop to the threat. As defenders, this is what we want. As with the circulatory system, there are precious few targets for effective nervous-system attacks and none are large.

On the front of the head, the best target area is between the pupils of the eyes and down to the bottom of the nasal area. The reason this is the best target on the front of the head is because the bone structure here is comparative thin and there are voids behind the frontal bone structure, allowing for easier access to the most effective target of the cranial area: the brain stem.

On the side of the head, this same target is located at the top of the ear, where the skull is relatively flat, with the important target—the brain stem—just behind it. 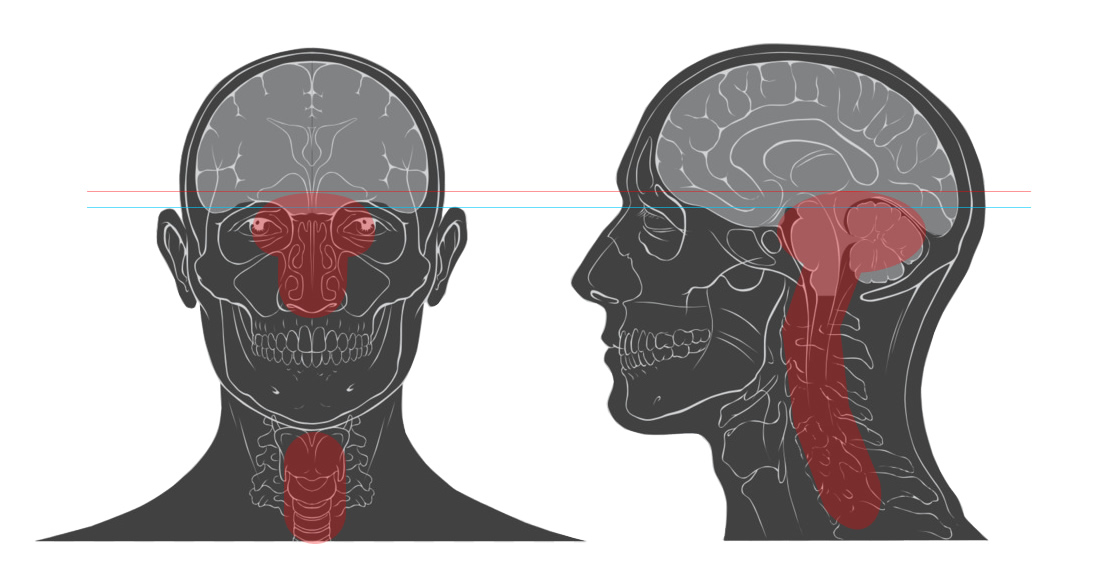 Note that other areas of the head are not good targets, as the human skull is designed to deflect energy away with its rounded structure. There are many examples of people being shot “in the head” where the bullet simply fails to penetrate the skull and either glances off or is caught under the skin where it travels around the skull rather than penetrating.

It is true that the impact of a high-energy projectile to many places on the head can induce quite a shock to the system and even move the head so violently that one loses consciousness, but this is not a sure bet. As one defending his or her life, you want to cause an immediate stop to the threat. You need surer targets.

Given the specific scope of this article I’m not going to spend a lot of time here, but it is important for armed defenders to understand how various body angles change your target areas. Targets on the front of the body are not necessarily the same as on the back of the body. They’re similar, but not identical. Learn them and adjust accordingly.

Note, however, that it is highly unlikely that any assailant will simply be standing facing your or away from you, with arms at his or her sides. More likely they’ll be both at some sort of angle and their arms and or weapons will likely be in the way of certain important target areas. 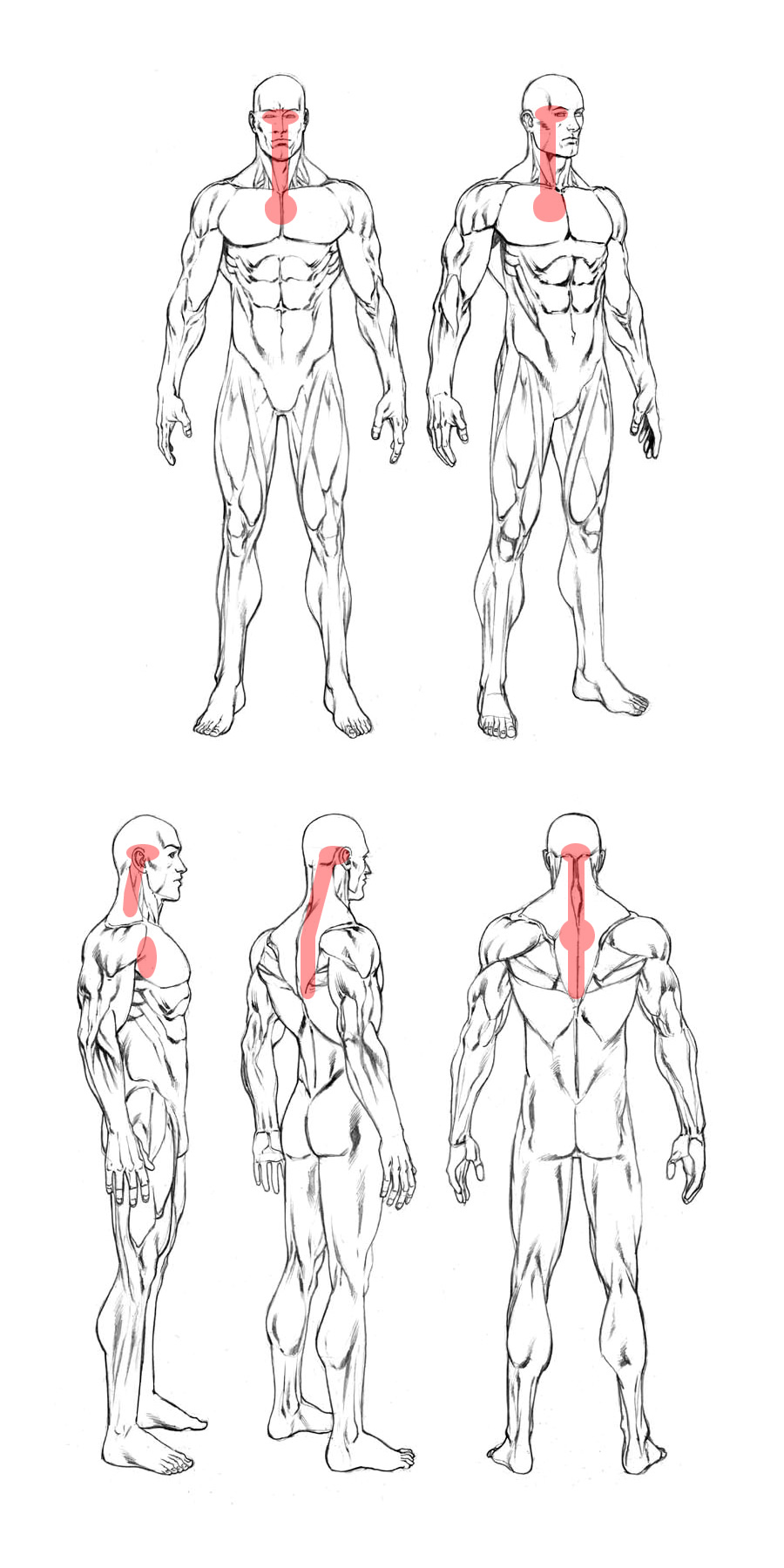 In addition to body angles, the fact that they’re attacking you or someone else means that they’ve got their arms and some sort of weapon in use, likely in front of their body. Additionally, their upper body is likely to be in a position other than simply ramrod straight and vertical. Notice how the assailants depicted on these training targets present far fewer effective target areas. 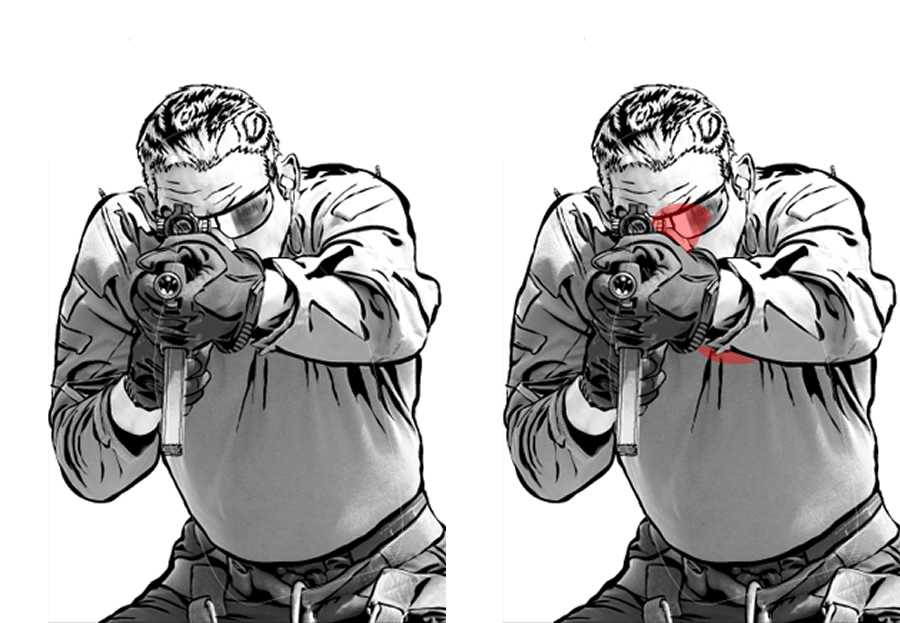 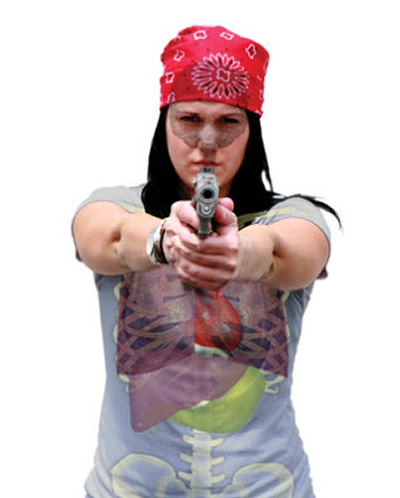 If you’re going to carry a concealed handgun, don’t live and train with the illusion that simply putting holes in your attacker, even in center mass, will do anything to stop them attacking you before they’ve done great harm.

Effective targets on a human attacker are few and they are small. Get training that focuses on effective target areas and practice for good hits on these effective, small target areas exclusively. If you’re going to defend your life or someone else’s life, know what you’re doing and acquire the skill and discipline to be effective.