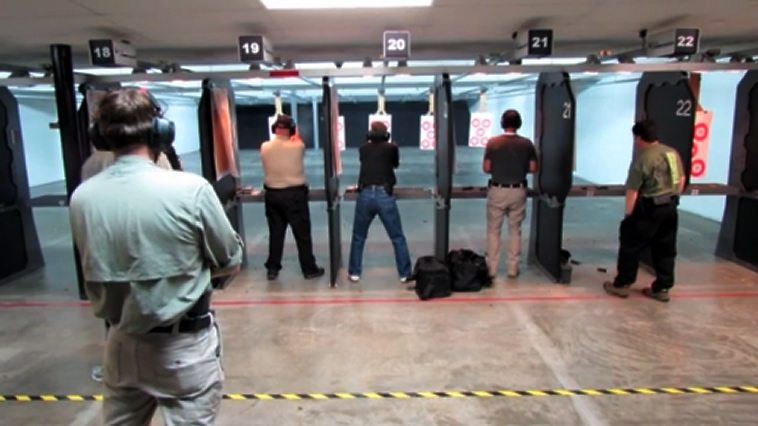 Pistol handling competence varies greatly among gun owners. Many of us have just enough competence to carefully and deliberately load, chamber, grip, then stand still to aim and fire, then carefully and slowly unload. Then there are the high-speed competitive shooters and tactical-operator types who manipulate their pistol and magazines almost like elvish warriors from some Hollywood fantasy film. It’s easy to admire that kind of skill, but for most of us it seems worlds away.

Now, not everyone needs to have pro-competitor skills, but moving beyond elementary pistol handling competence is something every responsible gun owner should do. There may appear to be a steep learning curve from beginner to highly competent gun handler, but that journey is really just a series of steps.

I was very pleased to learn that Eagle Gun Range has a class that constitutes that first step toward improved pistol competence. It’s called Introduction to Practical Shooting. This is a 3.5 to 4-hour class for intermediate shooters who are looking to move a step or two beyond mere static, slow-fire target shooting.

This class is for folks who are looking to improve their gun handing with things like properly drawing from a holster, magazine exchanges, and more-rapid-fire accuracy for follow-up shots. Even if you are an experienced shooter, that doesn’t necessarily mean that you’re a proficient gun handler. Most gun ranges don’t allow for the development of gun-handling skills so classes like this one are very important.

My Experience in the Class

As a competitive shooter and longtime student of self defense, I spend hours running practical defense and competition drills at a tactical outdoor range every week. I took Eagle’s intro to practical shooting class some weeks ago when it was first offered because I believed that the class could provide a really valuable experience. I was delighted that my hunch proved accurate.

The class began in the classroom, where we were allowed to don our holster and magazine carriers. We reviewed and discussed safety issues, equipment, individual technical habits, and other key shooting and carry conventions. We got to know one another and the instructors became familiar with the students’ respective experience levels. Our class had students with a wide and varied range of experience and skill levels.

After the classroom session, we went to the range bay for the practical instruction. Even though the range bay is a serious place, the class instruction and atmosphere were cordial and fun. Over the next 2 to 3 hours our instructors imparted the syllabus covering tactical/slide-lock reloading, the high-compressed ready position, the 4-step draw from holster, and presentation from retentive positions.

These gun-handling skills were first presented and examined in theory, then the techniques were demonstrated and broken down. After which, we students engaged in practice reps ourselves, with periodic correction from the instructors. Depending on the technique in question, we engaged in either dry fire or live fire practice—or both. Where applicable, there were even practical explanations for why a technique was performed the way demonstrated instead of some other popular way. These practical insights helped us to understand a bit beyond what was demonstrated.

As this class requires 300 rounds of ammunition, there’s plenty of shooting! Unlike some pistol classes, this one allows students to get a firm handle on performing the skills. Once shown a technique, and after some step-by-step familiarization, we were allowed plenty of practice reps. This high-repetition practice allowed us to build the foundation of muscle memory for these crucial gun-handling skills. As a result, one didn’t have trouble remembering what was taught or just how to properly perform these techniques later.

I was impressed by the instructors. All highly skilled and experienced shooters, each brought his own insights or technical forte to the instruction. Together, they presented what seemed a very well-rounded class.

In Short, I Recommend This Class!

This is a fantastic class. It provides a rare and valuable bridge between the fundamentals classes and the high-speed practical/tactical classes. Whether your interest is self defense, competition, or just becoming a more responsible gun owner, the skills taught and techniques offered in this class are fundamental to it all.

I’ve not seen this sort of class offered before. Especially one that allows the students to put in so many repetitions, as most similar classes allow for only a few reps of any specific technique.

I don’t work at Eagle Gun Range, but I visit and shoot there every few days. I’ve been elsewhere, but I always get disappointed by something when I go to most other ranges. One of the reasons I return week after week to Eagle is the quality of the staff and how they run things. This Introduction to Practical Shooting class, its format, and the instruction are all consistent with the excellence and expertise I’ve come to expect there.

If you’re a gun owner looking to develop or gain more skill in pistol handling, I highly recommend you take this class. I’ve have and I expect I’ll do it again soon, just to get that rare opportunity for training and critique with some top-notch instructors.