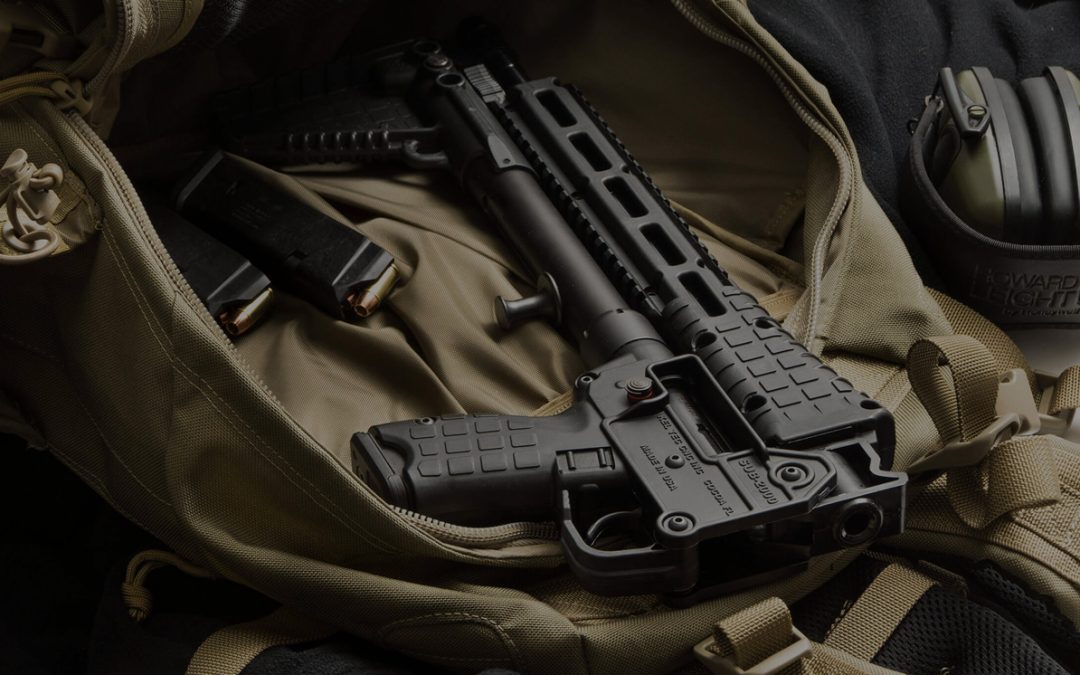 Kel-Tec is ever the innovative maker of odd and interesting firearm variants, most of which are comparatively inexpensive and seem to capture the imagination in some compelling way. With the SUB2000, they took the idea of the pistol-caliber carbine and made it compatible with Glock and other magazines. But other manufacturers have done that. So, even though it has a 16” barrel, they made it fit easily into a small backpack without disassembly. That was kind of a neat trick.

I’ve had my eye on the SUB2000 ever since they first came out and have long contemplated picking one up. Something else always took precedence and I never actually got one. This month, though, I had the opportunity to spend some time running the Kel-Tec SUB2000 Glock 9mm model at both static-indoor and practical-outdoor gun ranges, and now I get to share my thoughts on the experience.

Why Consider the SUB2000

The Kel-Tec SUB2000 is a full-sized pistol-caliber carbine (PCC) that folds in half to pack easily into a backpack or bag, or stows away in a vehicle, for relatively quick deployment at need. It is made specifically to be a utility rifle that conceals and/or pack for easy daily or situational carry.

You might consider the SUB2000 for its small footprint in basically any backpack or duffle (folded, it’s just a bit larger than a laptop computer). You might also consider it for the fact that it comes in a Glock-mag-specific (G19/27 or bigger) or “Multi-Mag” configuration in either 9mm or .40 cal chambering. So feeding the rifle should be easy. Otherwise, you might consider the SUB2000 for the fact that, unlike other small-footprint PCCs, it sports a full-length 16” barrel.

Note that the SUB2000 is not what I consider to be an ordinary PCC. When I think of a PCC I think of an AR platform with receivers made to run pistol rounds. I’ll confess that I am not and have never been a fan of pistol-caliber AR rifles. I say if you’re gonna have a rifle, get one made for rifle rounds and do rifle things with it. I believe that if you don’t need a rifle round, a plain old handgun is just fine…even better than a PCC.

The SUB2000, however, is a bit of a different animal. It is lighter than a typical AR-platform PCC and it has the peculiar talent of packing a full 16” barrel in a package that folds down to just over 16” overall and can be deployed from a ruck and fired on target in less than 10 seconds. That alone is compelling and the SUB2000 has long piqued my interest.

Anyway, let’s start with the specs: 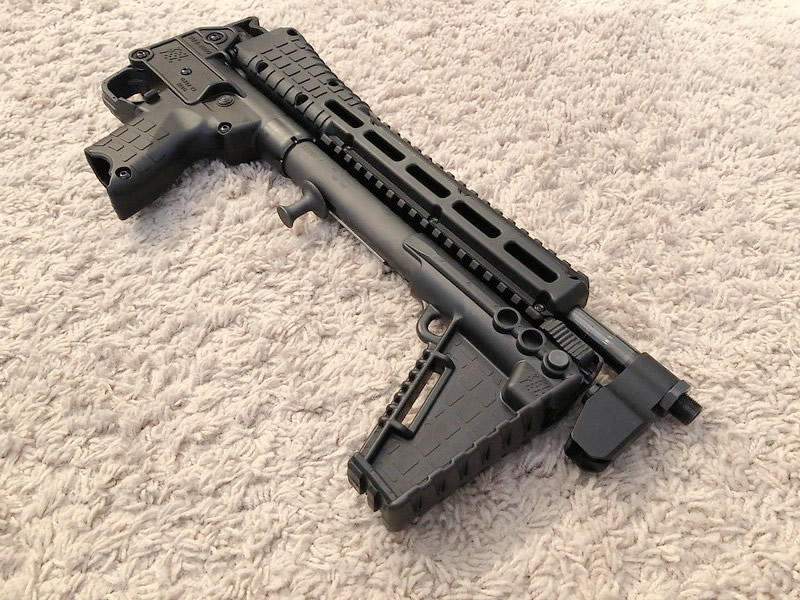 I started out standing in a static-indoor range lane just learning how to operate the thing. Not that it’s difficult, but its odd configuration means some peculiar controls. Owing mostly to the bottom-of-stock-arm charging handle I had to learn which hand should do what and when for basic manipulations, like sending home the bolt for an initial loading and then what changes when performing a speed reload.

The charger locks up into a notch at the rear-right of the stock arm. After a couple of trials I found that for an initial loading with a locked-open action, you pretty much have to grip the gun up front on the handguard with your secondary hand and slap the charger down with your right hand (similar to how an MP5 works). However, for a reload, it’s best to keep your primary hand on the grip, then with your secondary hand load the mag and reach back to charge the handle, then re-grip the fore-end and fire. For reloads, it’s kind of like running an AK-47. Heh, it’s easier than it sounds. At just over 4 pounds, the gun is light and easy to shoot and manipulate.

The front sight is fixed to the end of the barrel and the rear peep sight pops up into position when you unfold the rifle. It is not terribly difficult to get a proper sight picture, but it’s neither as easy nor as comfortable as doing so with a real rifle. The “stock” is just molded hard plastic and it does not have anything like a smooth, rounded, elevated surface for your cheek to weld. It’s all rather uncomfortable and I immediately found myself wishing for a red-dot optic so that I didn’t have to get my face down quite so far onto the hard, bumpy stock. In fact, my third outing to the outdoor range with the SUB2000 I did mount a red-dot on it, and found shooting it to be far more enjoyable.

The trigger is a bit heavy and not so smooth, but I didn’t notice it causing any problems when running drills. The trigger breaks at about 10 pounds and it has a very plastic feel. The charging spring is pretty darned stiff and you have to charge it like you mean it. The bottom-of-stock-arm placement is a bit awkward, but not a dealbreaker. I soon learned to run it pretty smoothly for basic manipulations.

That folding lock at the rear of the stock is NOT an inviting cheek rest. This is definitely a utility gun and not a fun plinker or main range gun.

When the magazine runs dry, the bolt does not lock back and, instead, you get the “thunk” of a trigger falling on an empty chamber. Reloads are accomplished in much the same way as with a pistol. The mag release is in the same position as for the average pistol and I had no trouble running reload drills, as seen in this video:

I spent quite a few rounds running deployment-drill reps and reload-drill reps. Took a minute to get the hang of deploying quickly from my backpack, but that was due mostly to figuring out which way was best to stow it in the pack pocket to make deployment as quick and easy as possible. The video above shows that it took me roughly 8 to 10 seconds from “go” to get a round on target. Not bad.

The SUB2000’s main feature is that it folds down from a 30.5” rifle down to a 16.25” stowable assembly. Barely larger than a laptop computer, it fits easily into nearly any backpack, shoulder bag, or day bag. In this way, it’s the kind of rifle one can keep with all day, concealed, without fear of detection. At just over 4 pounds, it’s no great encumbrance either.

For folding the gun (with a clear chamber, only), you pull forward on the trigger guard a bit and the lock releases allowing you to fold the barrel back on the action and stock arm. Easy peasy. To unfold, give the plastic lock that holds the front sight a slight tug and the barrel is again free to fold down and lock into operational position. It’s all quite easy.

As mentioned earlier, the trigger is just okay and breaks at about 10 pounds. The safety is a crossbolt style button on the rear of the receiver. It is not placed for ergonomic operation—as with an AR selector—but I’ll argue that it shouldn’t have a “safety” mechanism anyway, and should be left in the fire position so there’s no need to interact with it (safety is a human behavior, not a lever on the receiver).

The model I used was fed by Glock magazines, and you can use anything from the G19 size, up. When ejected, the magazines dropped free for me and I had no trouble with quick reloads…except where the only way you know it’s time to reload is when the trigger goes “thunk” on an empty chamber. The charging handle is kind of ugly, but serviceable.

Mine had a threaded barrel for mounting a muzzle device or a suppressor. Not sure either is warranted, as they would mar the small fold-down size of the stowed rifle. The handguard has M-LOK slots on the sides and picatinny on the top and bottom, so there’s room for accessories. However, putting anything on the top picatinny rail means you can’t fully fold the rifle. There are aftermarket accessories to mitigate this issue, but out of the box, the top rail has to remain clean.

I think the Kel-Tec SUB2000 is pretty darn good at being exactly what it’s supposed to be: an easily concealable, packable, full-length pistol-caliber rifle. It is quite bare-bones and utilitarian out of the box, but with some aftermarket love it can become quite a bit more effective and easier to use well.

There are some tradeoffs as compared to AR-style PCCs, but the full-length barrel, weight, and packing-size of the SUB2000 make it compare fairly well. And the fact that it will take your mid-size or larger pistol magazines, and thus sort of maintain your platform efficiency, is quite a boon. I wouldn’t want to fight a foreign insurgency with this thing, but I think it’d be good in a pinch, and it makes for a helluva survival rifle.