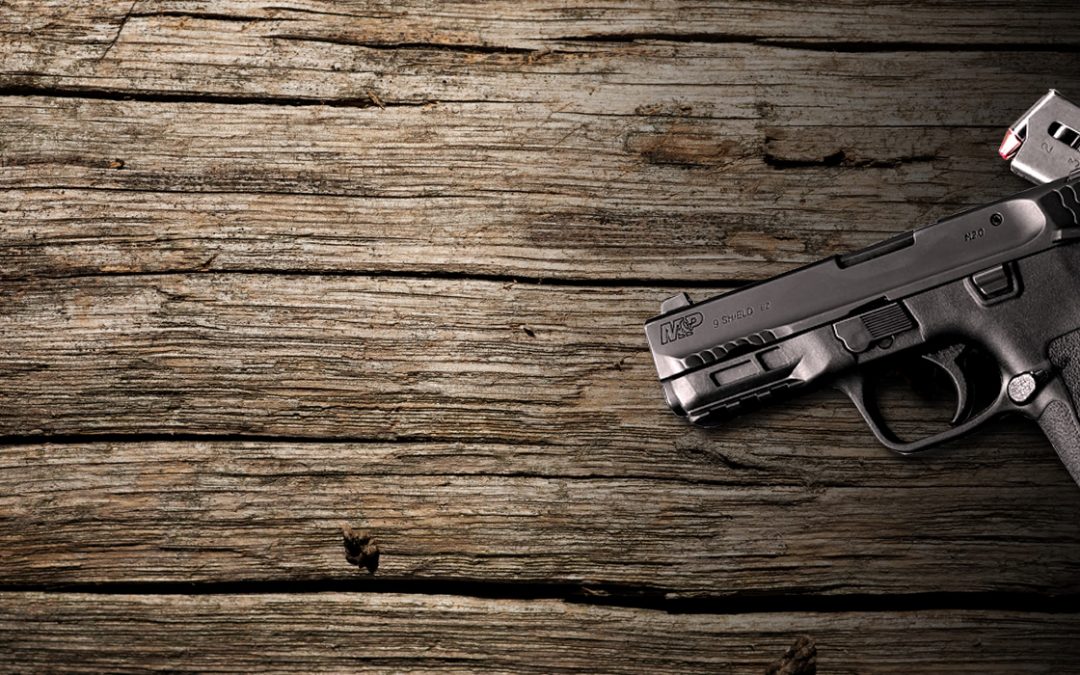 I remember a couple of years back getting to spend some time shooting the M&P 380 Shield EZ, and being rather impressed. I also remember thinking that it’d be great if Smith & Wesson would build that idea in 9mm. And so they did.

The M&P 9 Shield EZ brings the positive features of its predecessor into a 9mm, internal-hammer-fired pistol that very nearly mirrors the dimensions of the .380 model.

Why Consider the 9 Shield EZ

The M&P 9 Shield EZ is a pistol in a size and configuration that makes it rather easy to carry concealed. While it is larger than its original Shield namesake, it is still rather compact. It is slightly smaller and thinner than a Glock 19, but it’s still enough gun to be easy to grip and control while firing.

You might consider the 9 Shield EZ for the fact that it is deliberately made to be easy to rack the slide—as the spring is far softer than is found on most pistols. It is therefore well suited to people who may have trouble manipulating the slide of other pistols. You might also consider the 9 Shield EZ for the 8-round magazines that are extremely easy to load. Pull tabs on either side of the single-stack magazine allow virtually anyone to easily load the magazine to full capacity. Or you might consider it for the fact that it’s one of the few modern poly-pistols that has a grip safety; a feature that some find very appealing and comforting. 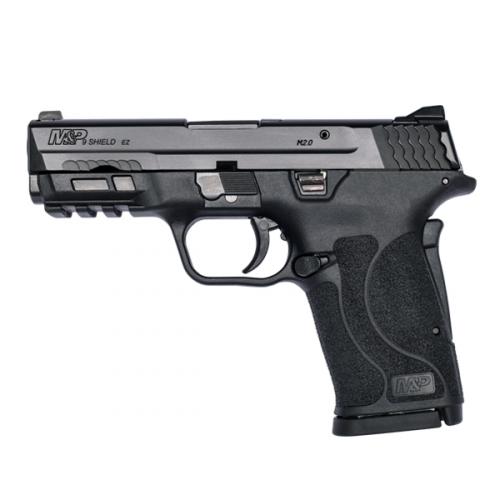 I recently got the chance to try out the 9 Shield EZ and have a few thoughts to share on the experience. Let’s start with the specs:

Despite the prominent visual feature of the large grip safety protruding from the backstrap, I’m happy to report that it is a non-factor in running the gun. I never felt it or noted its engagement. And that’s the way it should be. Yes, it looks a bit weird when the gun is not in your hand, but it’s something one should and likely will get over.

The frame is right in what I consider to be the sweet spot for size and configuration. It’s small enough to be somewhat compact, but large enough so that you get a full grip and full control when firing. The grip features M&P’s M2.0 texture, which is pretty nice, but still not rough enough for my taste. But it’s better than you’re apt to find on most poly pistols.

Loading the magazines is as easy as reported and anyone should be able to load them. Similarly, racking the slide to chamber the first round was ridiculously easy. That is one soft spring! I took my first shots for precision and slow fire to get a feel for the gun. Pretty much what I expected; neither too stout nor overly soft-shooting. If feels like a gun its size and weight should feel when shooting 9mm. It was not at all difficult to control the gun in shooting strings. I then picked up the pace.

I later ran some fast shooting strings, with 4 shots in 1 second to a torso target, followed by one round to the face. It was not as easy as doing it with my Glock 19, but this smaller gun was still manageable for keeping rounds where I wanted them. The one thing that did give me a bit of trouble was the front sight.

The 9 Shield EZ’s front sight is a white dot, but not just a white dot. The “dot” is a hole in the front sight post and that hole is filled with white paint (or whatever material). The white is fine, but the fact that it’s a hole means that dirt and dust and gunpowder residue can get in there and render the “white” dot invisible. It was especially hard for me to pick up the front sight and to maintain a good sight picture when shooting faster strings of shots. Were I to own this pistol, I would trade out the stock 3-dot sights for something far more bright and visible.

The trigger on the 9 Shield EZ is pretty darned good. The action is smooth and the trigger breaks at around 4.5 lbs. The reset is very soft; while the spring on some pistols’ triggers push your finger forward in the reset, the EZ’s trigger reset is comparatively weak. I don’t think that’s good or bad, it’s just different from what I’ve found in most triggers. I had no trouble with the trigger and it completed what was, overall, a very easy-to-shoot experience.

The grip safety is large and runs for about 2/3 of the backstrap. This feature prevents the trigger from engaging unless the grip protrusion is fully depressed, ensuring that a full grip on the frame is required for the pistol to fire. This feature allows you the benefit of reholstering while not depressing this backstrap lever, ensuring a far safer operation even if some foreign object catches on and depresses the trigger. It’s a feature found on a number of pistol models and one that many people prefer. 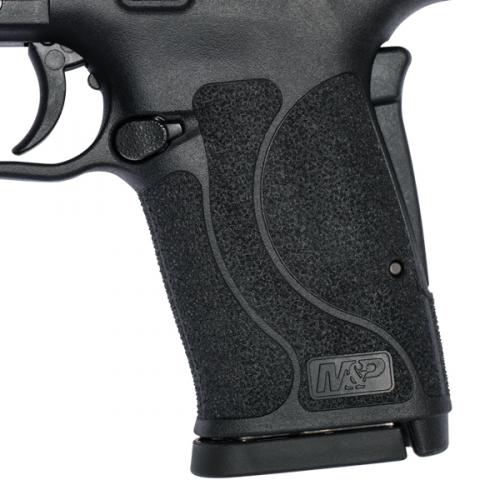 The 9 Shield EZ looks like a striker-fired pistol, but it’s actually an internal-hammer gun. If you’re not familiar with internal-hammer-fired pistols, they’re not at all uncommon and, for operation, you likely won’t notice any difference from what you’re used to. There are differences on the inside, but you run it like any other modern pistol. 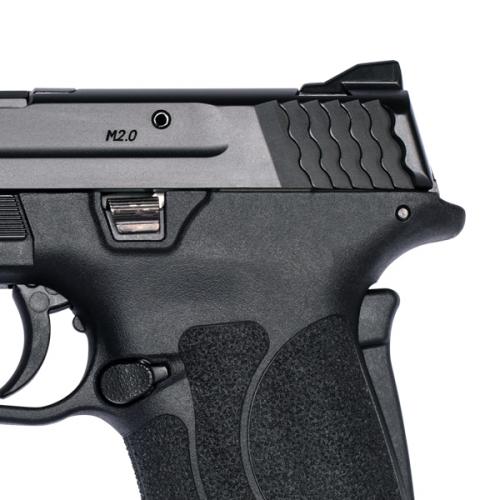 It sports white 3-dot sights that are serviceable, but problematic, as detailed earlier. The stainless-steel slide has nice cuts on the rear and those…silly M2.0 machining marks on the lower front of the slide (I can’t help but make fun of that terrible design feature). The slide is remarkably easy to rack and this is an excellent feature that suits the “EZ” brand. The rear of the slide has short “wings” machined from the slide to act as an easy anchor for racking the slide.

The M&P 9 Shield EZ comes either with a thumb safety lever or without. My experience here was with the non-thumb-safety model, so I cannot comment on the adequacy or action of that needless gadget. The slide-stop lever and takedown-lever are located in the traditional positions and neither got in my way when running the gun. The magazine release, which is reversible, I found well positioned and easy to manipulate when it was time to reload. Smith & Wesson know how to design pistols. 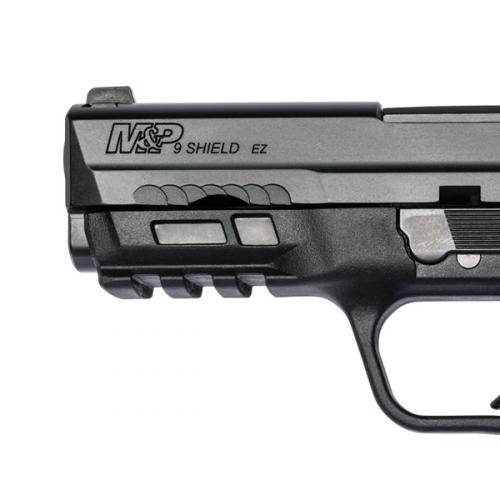 The frame sports a picatinny rail for lights or other accessories. The M2.0 grip texture is nicer than can be found on many poly pistols, but I’ll still argue that it must be stippled for proper everyday carry security (rain, and especially sweat and blood are very slick). The grip angle is 18-degrees, which is common to the M&P line—it’s more vertical than is found on a Glock, for instance.

The trigger, as detailed earlier, is quite nice. The shoe is a one-piece component instead of the two-piece hinged design common to the Shield model. Like all M&P pistols, the trigger shoe is clean and does not have a center “safety tab” common to most modern pistols. 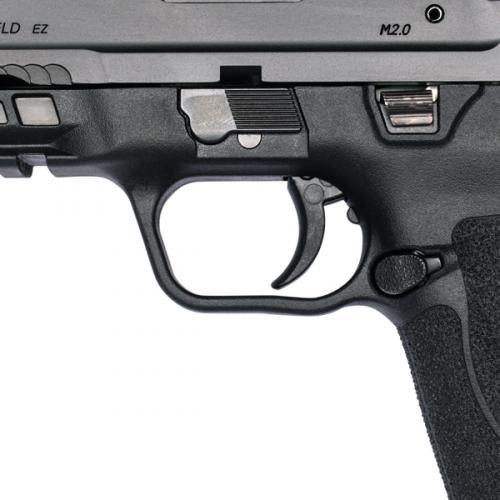 As you can see, there are few problems with this design and it’s hard to find something really wrong with this pistol. I would not hesitate to recommend the M&P 9 Shield EZ to anyone who wanted an easy-to-load and easy-to-rack slide for their carry gun. If you’re interested in these features, I recommend you rent the pistol and give it a try yourself!