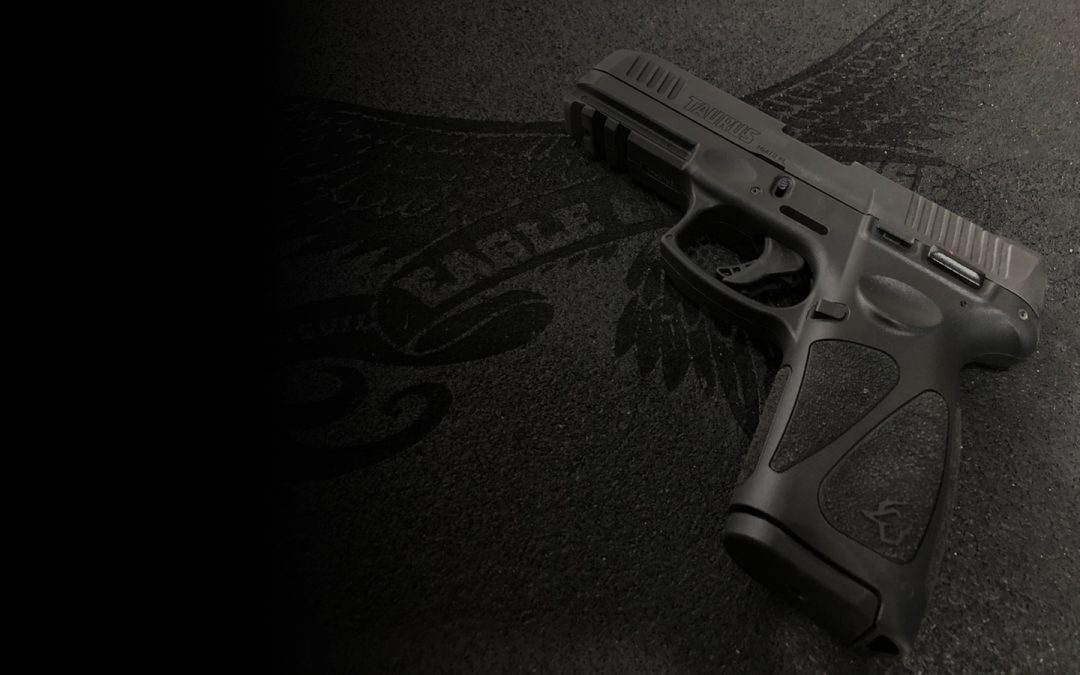 I confess that before spending some time with the Taurus G3 I had never even touched a Taurus firearm. Over the years I had heard some less than flattering things about their quality and customer service. Recently, however, I had begun to hear good things about the G2C compact pistol, as well as some inklings about Taurus turning over a new leaf.

Lately, I’ve come across a couple of flattering reviews of the Taurus G3 pistol and, to my surprise, it was suggested I do a first-shots review of the G3. I’ll further confess that I didn’t have high hopes for this rig, but handling and shooting the G3 has been a surprising experience from start to finish. While this isn’t an exhaustive examination and cannot account for issues of reliability or longevity, I’d like to share my impressions from having spent time this month with the Taurus G3. 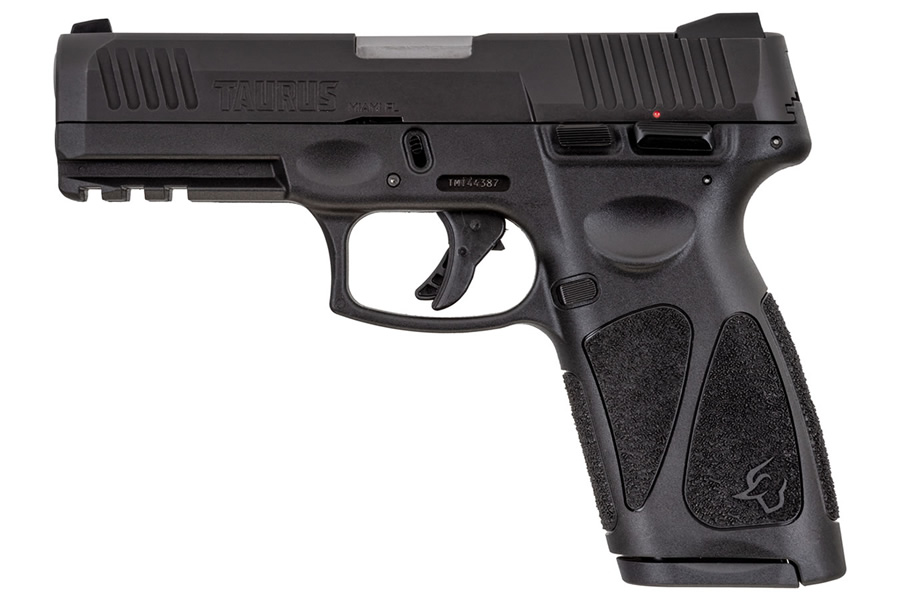 Why Consider the Taurus G3?

I supposed the best reason to consider the G3 is for its value. As my review here should indicate, the price vs. features and performance is about as good as I’ve ever seen on a pistol. The price (typically somewhere under $300) is as low as I could ever imagine for a pistol like this, so if you are a fan of Glock or Springfield or Sig medium-sized pistols, but don’t want the $500+ price tag, the G3 would seem to have been made for you.

Roughly the same length, height, and width of a Glock 19, this pistol feels and behaves like many of its more expensive brethren. And with few discernable shortcomings.

Despite the fact that it’s a “budget gun,” I really enjoyed shooting this pistol. The overall experience was virtually as nice as shooting any similar Springfield or Sig! The very first thing I noticed, however, was that the trigger takeup to the wall is looonnnng. Length of travel aside, it’s quite a nice trigger; very soft up to the wall and then a less-than-5lb break. Were the takeup shorter, I’d take this trigger on my EDC gun any day (but it is so very long).

Here you can see the rather long trigger takeup. The second iamge shows where the “wall” is, prior to break. It may not look long here, but it is longer than most other pistols I’ve touched.

For the first couple of shooting strings the long trigger press led me to shoot rather low (owing to the fact that my trigger mechanics are deeply ingrained muscle memory specific to my EDC gun’s triger), but once I fixed MY flaw, things evened out and I had no trouble at all keeping rounds where I wanted them.

The recoil impulse is about what I’d expect, no different from my G19 really, and despite the fact that there’s no serviceable “gas pedal” ledge for my support-hand thumb the muzzle rise was not bad at all. The pistol is comfortable to hold and run and is easily controllable for fast shooting strings. If I didn’t know better, I’d assume I was shooting a far more expensive gun.

Something I immediately noticed is that the grip is slightly fat. The G3 is a pistol perhaps not best suited to folks with smaller hands. My medium-sized hands didn’t have any trouble with the grip, which has a rather fantastic texture on it, by the way. No kidding, the texture on this pistol makes it the ONLY production pistol with a useful grip texture. I wouldn’t care to stipple this one, and I’m something of a grip snob. Very well done, Taurus!

I could find no information on what the finish process is used for the black matte slide, but it is made of stainless steel. Some models come silvered and others matte black. The slide serrations are front and back and they are very sharp and grippy. The sights are 3-dot and they’re okay. There would be no necessity to replace the sights (like you must on a Glock), but I would choose to put something more visible were I to carry this pistol. The thumb “safety” lever is unobtrusive enough without being difficult to manipulate. If you must have a “safety” gadget on a striker-fired pistol, this is a good example of how to do it. The rest of the controls are well located and never tripped me up as I was running the pistol.

The frame is black polymer and there’s an accessory rail up front. There are indentations molded into the frame, back where the thumb might (but doesn’t and should not) rest for 1-handed shooting and up front where you might want to index your support-hand thumb. These features are cheaply done and the front index point does NOT work as a “gas pedal” rest for mitigating muzzle rise; cycling the gun just causes my thumb to slip out. I suppose that the front section might work if one stippled that area, but it just seems like an afterthought here. 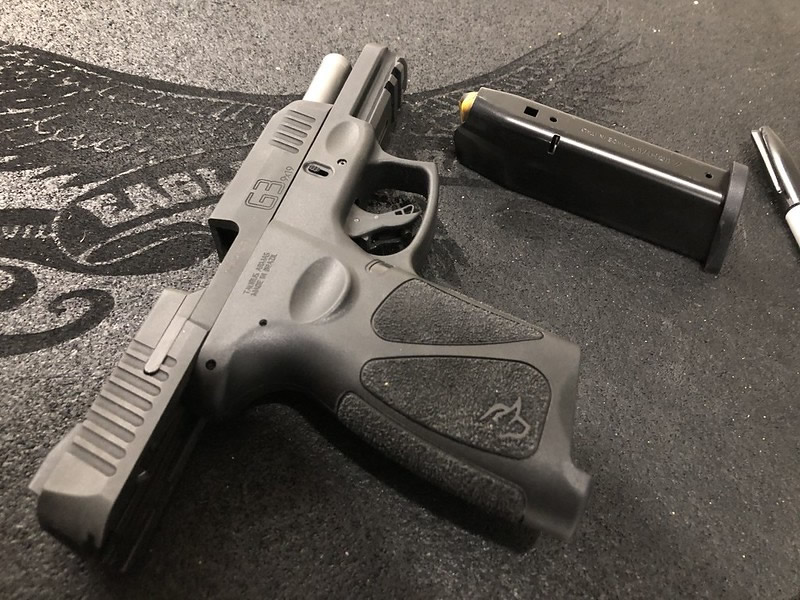 The trigger has a weirdly wide safety tab in the middle of the shoe, but it is flat and disappears completely into the trigger upon press. I found no discomfort at all from the tab and I quite enjoyed the flat face of the shoe. Combined with the smooth action (albeit quite long), it’s a very comfortable trigger.

Interestingly, the G3 has re-strike capability; meaning that if a round fails to fire with the first trigger press, there is a double-action trigger press available to try it again. I suppose that this could be a positive feature, but I have to say I’d never use it. “Click” means one thing and one thing only to those of us who train, and that is tap, rack, bang (as a first option, at least). This re-strike capability seems like a very odd feature.

As a near-full-size medium-sized pistol, it is at the outer size limit for what most folks would consider an everyday-carry model. It’s a tiny bit taller than a Glock 19 and almost exactly the same width, but a full 4 ounces heavier than the G19. Depending on which version of the G3 you get, it comes with either 2 flush 15-round mags or one 15-round and one 17-round extended mag. I noticed that when depressing the magazine release, the mags pop out of the grip with gusto. That’s always a nice feature to see, as some more expensive pistols have lazy magazine ejections.

Pros
Just about everything tangible about this pistol is positive. The slide design and serrations are well conceived, the features are comparable with any good pistol and the grip texture is best in class. The smoothness of the trigger is a plus, as is the energetic magazine ejection.

Cons
There are few tangible cons to cite on this pistol. The trigger takeup is longer than you’re apt to find on other pistols, the sights are just okay, and the frame is a bit trite in its design; but these are nitpicky things. People with smaller hands may not like the grip size. What I have to wonder, though, is where the cost savings comes.

My assumption is that there may be expediencies built into some of the components that are not noticeable without many thousands of rounds to reveal them. But that is just my assumption based in the fact that this pistol really does seem a bit too good to be true. When internal components do wear out, I have to wonder how easily available the replacement parts might be…and if they’re replaceable by the owner. Food for thought.

The Taurus G3 is just a surprising pistol and it’s very difficult to impossible to see how the sub-$300 price is justified. Yes, there are nicer features on more expensive pistols, but the G3 gets most of the basics right and, with practice to learn that trigger action well, it seems every bit as good on that score.

If one were looking to get a good, basic pistol for carry or home defense on a budget, I have absolutely no reservations in recommending giving the G3 a try. Bet you’ll dig it.