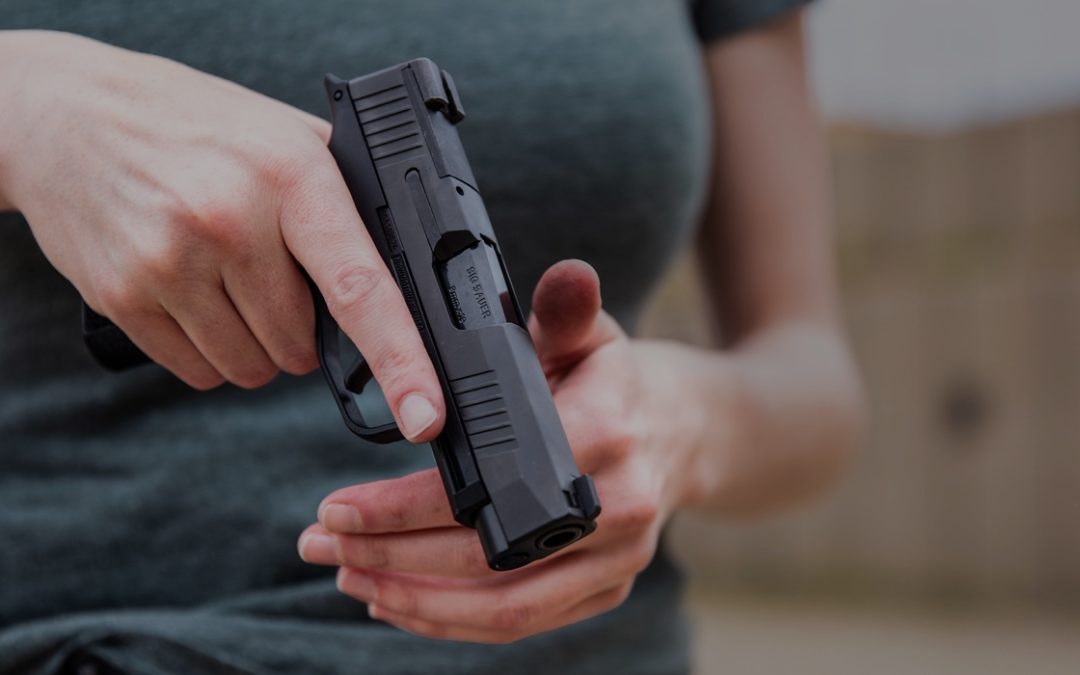 The Sig P365 is a now-famous EDC icon of size vs. capacity, packing at least 11 rounds into a tiny, shootable, and accurate package. Last year we did a first-blush review of the Sig P365 and the overriding conclusion was positive. Back then, however, there were still ongoing reports of the P365’s propensity to break springs and strikers. Since then, the pistol has seen a lot of use and testing and Sig seems to have worked out the kinks in its revolutionary subcompact pistol. By all accounts, it is now a reliable gun.

Since the time of our last review, Sig has released two new variants of the pistol: the XL and the SAS models. I’ve recently gotten to spend some time shooting all three versions and here I want to share my impressions and comparison notes regarding the original P365, the P365 XL, and the P365 SAS.

This is a pistol made specifically for everyday carry, and even more specifically for times when carrying a larger gun is not preferred or not possible, but you still want a few extra rounds. It’s also, according to its grip dimensions, made for folks who have smaller hands—the grip is quite small as compared to just about every other pistol. Like all subcompact pistols, it’s made for experienced shooters and is not advisable for beginners. 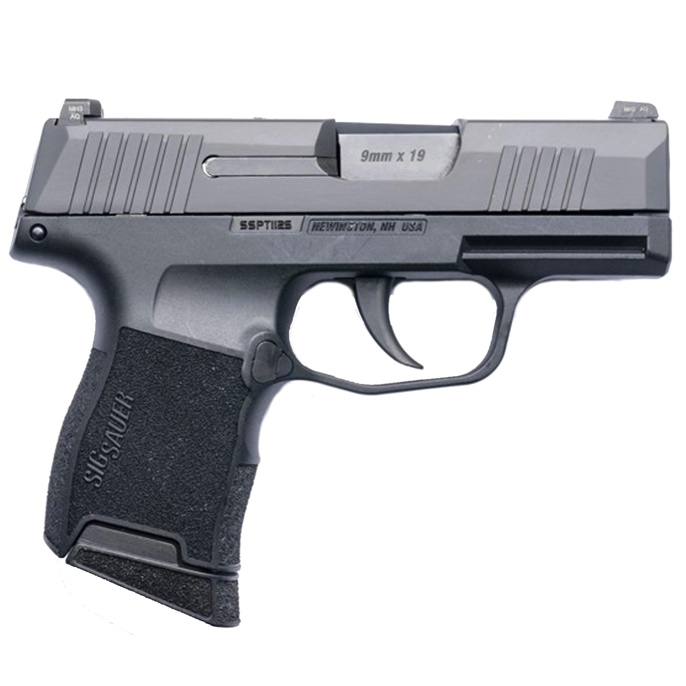 The XL adds some other dimensions to the “specific mission” list. The P365 XL is larger both in slide length and in grip height, and while it maintains the general frame dimensions (same grip circumference) and controls, it comes with the flat “X-Series” trigger shoe and the slide comes optic ready for the Sig Sauer RomeoZero or the RMSc reflex optics. Its primary purpose would seem to be a slightly larger compromise toward more rounds and easier accuracy and longer distances at the expense of concealability and weight. 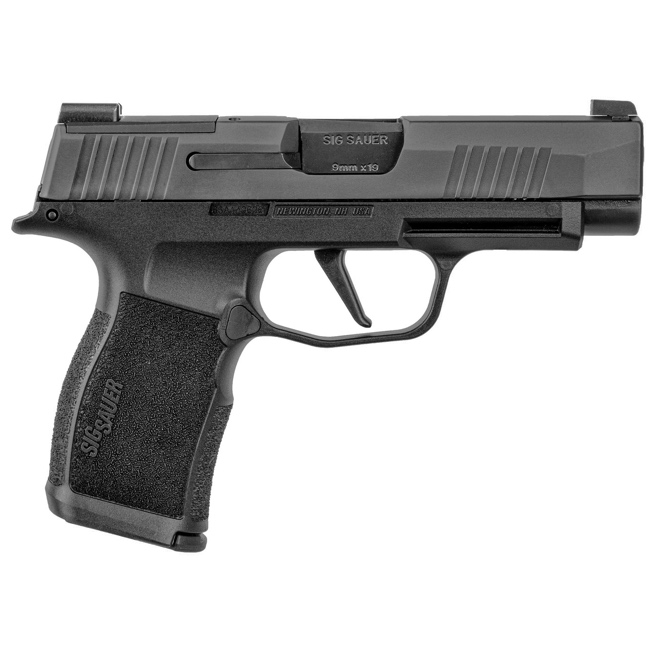 The SAS model is the size of the original, but the controls are modified/minimized and the sighting system is moved into the slide, all to support the snag-free idiom specific to this model. It’s apparent purpose is for non-holster carry in, say, a purse or pocket or even “Mexican carry” in the waistband. I’ll admit I find this purpose problematic and downright irresponsible. More on that later. The SAS model also features a ported barrel and slide, ostensibly to help mitigate the snappy muzzle rise when shooting. The takedown lever and slide stop lever are both greatly minimized on the SAS, which leaves a very slim and genuinely snag-free tool.

I do think that a “de-horned” pistol makes good sense in most cases, but the removal of traditional front and back sights in favor of the flush-mounted “FT Bullseye” sight could present something of a learning curve for most folks. 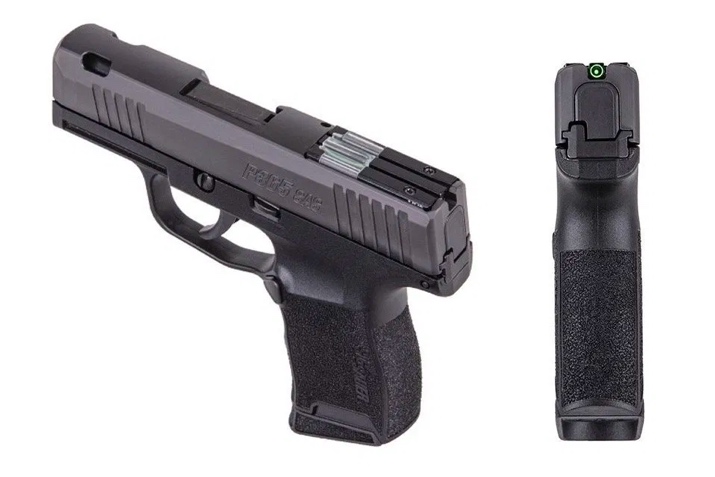 Overall, it’s the size vs. capacity vs. weight genius of these models that makes them noteworthy. They do a fantastic job of offering up a lot of capacity in such a small package and at such a low weight. These things matter, so it’s no wonder that Sig’s P365 is so popular.

I spent time shooting these three pistols individually over several sessions and all together in one session. What is immediately apparent when shooting them, and this is should be no surprise, is that they’re all fairly snappy even with practice ammo. I shot some Federal 124gr Hydra Shok through the P365 and the recoil difference from practice ammo was pronounced and not so enjoyable (I wouldn’t want to do a 200 or 300-round training session with it).

For practiced shooters, this unsurprising feature of the P365 should present no problems. I have to wonder, though, if the 9mm report in this little pistol will be a bit uncomfortable for new shooters and untrained petite women. Surely, this is a question each has to answer for him/herself. As I mentioned earlier, the two smaller models are best for experienced shooters and are not ideal for beginners.

Gripping and controlling the original and SAS models of the P365 with the pinky-extension magazine was quite easy, as it presented a full grip for my md/lg-sized hands. It is worth mentioning that all three models of the P365 are very comfortable to grip. This pinky extension offers something close to the same grip as one gets on the P365 XL. Without the pinky extension, the smaller models are a bit harder to grip and fire confidently; something that, again, new shooters and those with weaker grips may not find comfortable.

Shooting the SAS model was essentially the same as shooting the original, though the ported barrel and slide offered the slightest difference in muzzle rise with each shot. I’m no fan of ported slides/barrels on defensive pistols due to the potential for injury in close-quarters encounters and retention scenarios. Not sure they’re worth it on this pistol. The minimized slide stop lever on the SAS is a bit more difficult to manipulate, but I don’t see this as a problem as locking the slide back is not usually a tactical manipulation.

I found short range accuracy with these smaller models fairly easy (with one caveat*) and was able to maintain sub-3” 4-shot groups out to 9 yards when shooting at a little faster than 1 shot/second. As these pistols are made for close encounters, I’d say they’re plenty accurate for more precise work at typical-encounter ranges and somewhat beyond (I never went out beyond 9 yards with them).

Shooting the larger P365 XL model offered a slightly more enjoyable experience than with the smaller ones and I can say that I enjoyed the XL’s flat trigger more than the curved trigger of the smaller models, but that’s a personal preference. Recoil was only slightly less than that of the smaller models and accuracy was at least as good.* The one little hiccup I experienced was that I could not easily eject an empty magazine without drastically changing my grip, as the meat of my hand prevented the mag from falling free. For a fighting gun, that is not optimal, but that was with my hands, others’ hands may not present this issue.

*The caveat regarding accuracy with all three of these pistols stems from the rather small grip dimension and how that affected both my grip and my trigger-finger placement. With a “normal” grip my trigger finger was a bit too far into the trigger and my accuracy suffered somewhat until I modified my grip to keep some of my finger out of the trigger. This will likely be a factor for most people when shooting these pistols, though whether it’s a problem is more of an individual factor. Surely, for some folks the smaller grip circumference will be a boon!

I had the opportunity to briefly carry and draw the original P365 with a flush magazine in both an appendix holster (I regret I do not remember the brand) and a soft pocket holster (Kydex would have been better). In either position, the pistol concealed ridiculously well and comfort-wise was easily forgotten seconds after donning.

I typically carry a Glock 43 when I’m not able to carry my larger EDC pistol and the P365 was at least as easy and comfortable to carry as the G43. Perhaps more so. Since the P365 is made for concealed carry, I’m not at all surprised.

Though I didn’t attempt it, I have to believe that the XL model would be slightly less concealable than the smaller models, though it isn’t really a subcompact anyway. The XL is slightly shorter in both height and length compared to a Glock 19, but the fact that it is at least 10 ounces lighter than the G19 makes the P365 XL much easier to carry and conceal!

Conclusions on the P365 (original)

The P365 is a tiny, lightweight powerhouse with pretty amazing capacity. As Sig seems to have fixed the reliability issues, it’s hard to fathom a reason not to consider this pistol for fancy-dress carry, non-permissive-environment carry, or minimal-clothing carry. All with the caveat that because of the small size and snappiness, it is best suited to experienced shooters with smaller hands.

Conclusions on the P365 SAS

All that was mentioned above applies to the SAS model. My only caveats are than the slide and barrel ports are an odd feature, and potentially dangerous, and the slide-integrated FT Bullseye sight may be difficult for folks to get the hang of. I also note that the lack of a traditional rear sight makes one-handed slide racking off of a belt quite a bit more difficult. For a defensive gun this is, in my opinion, a flaw that potential purchases need to take into account.

Due to the oft-discussed reason for the slick-sided design of this pistol, I feel the need to criticize the notion of non-holster carry. It is highly dangerous and adults and children pay the ultimate price every year for this irresponsible mode of pistol carry. The “de-horned” nature of a pistol is not necessarily a bad thing, but the reasons for creating such a model are highly suspect, in my opinion. Even the notion of a soft pocket holster is irresponsible and reduced snag is not an issue for responsible carry in a Kydex holster. This move by Sig truly puzzles me.

Conclusions on the P365 XL

The XL model is a more-comfortable-to-hold/shoot variant that allows for a couple more rounds in the magazine and a slightly better grip…at the expense of concealability and weight. When one goes for superior concealment, these tradeoffs are not necessarily good. However, when one is trying to go more concealable then, say, a Glock 19 or similar-sized pistol without sacrificing too many rounds, the XL makes some good sense. The sights are good right out of the box, it’s comfortable to grip and to shoot, and the trigger is not terrible. Some folks will like the fact that it’s optic ready (for just a couple of reflex models).

Other manufacturers have worked to mimic the size vs. capacity that Sig originated with the P365, but none of them are named Sig Sauer and for many folks, that name matters. I recommend that you come to Eagle Gun Range and rent one or all three of these models and try them for yourself. You might find a perfect solution to your EDC needs.