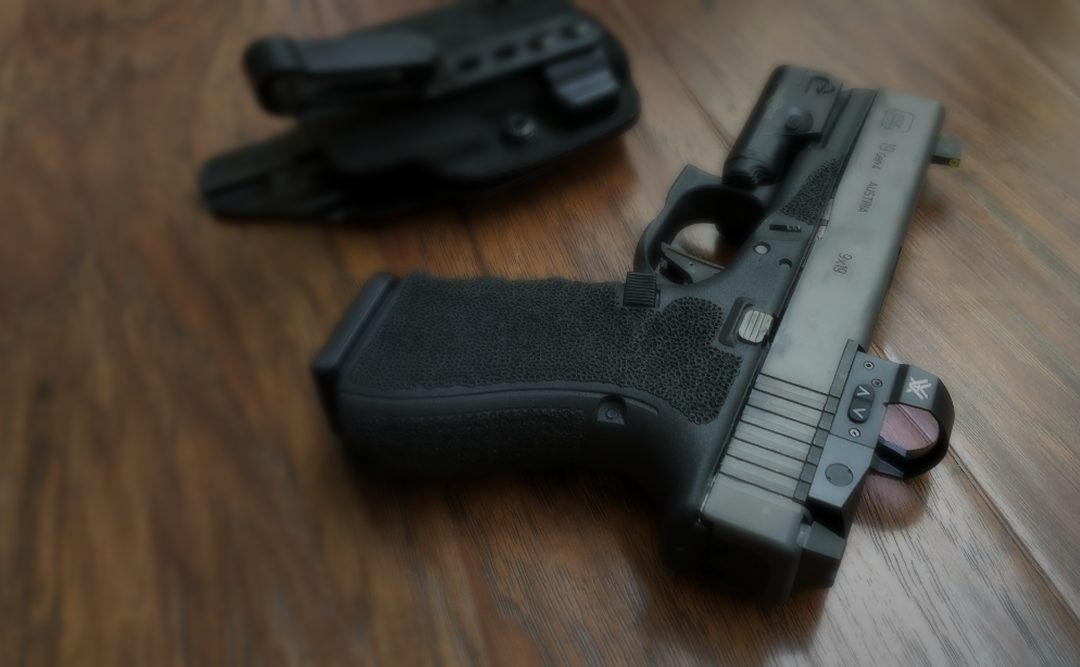 One Quirk of Using a Red-Dot Pistol Optic

A few weeks ago, I pulled out my Glock MOS slide, put a Vortex Venom red-dot optic on it, and put it on a G19 frame and started practicing with it. I had tried a red-dot optic a couple years ago and did not warm to the experience. This time, though, I committed to the learning experience and aim to push though the initial uncomfortable phase to get at least to near-current competence using this optic; just to see if I can find any superiority to irons in the approach.

For whatever reason, this time I had little trouble in quickly finding decent competence using the red dot. I expect that it’s easier this time because I’m using a decent-quality optic, while last time I was using a cheap one. But within a few hours I had no trouble at all drawing, pressing out, and finding my dot right where I expected it. Muscle memory counts! But I had less success in doing the nonstandard movements, like pressing out one handed or performing a reload and then pressing out. Clearly, this is going to take work.

As an experienced and continually practicing shooter, I’m able to push through the little difficulties a new sighting convention brings as I’m able to rely on much-practiced fundamentals. There is, however, one issue particular to the red-dot (or at least it is, so far as I can tell) that conflicts with my fundamental approach to pressing out and breaking the first shot. I’m talking specifically about fast first shots out of the holster.

I don’t know if this technique is common to many pistol shooters or just particular to me, but my habit for achieving a quick first shot is to see the sights as I begin to press out and the gauge the instant where they’ll be properly aligned with my target at the end of the press so that I can time the terminus of my trigger press with the alignment of the posts on target. In this way, I don’t have to wait to get a good sight picture, recognize the alignment on the target, and THEN press the trigger—which would take many milliseconds longer. Rather, I’m estimating a few things all at once and completing several actions at one point, at which time my shot breaks on target.

Using this technique, I’m able to routinely get good hits on 8” or 6” steel at 25 yards while stepping to one side, clearing my garment, drawing from concealment, and pressing out for the shot…all in less than 1.4 seconds.

Here are some examples:

But with the red-dot optic, I can do none of this. Unlike irons on the top of the slide, I cannot pick up the red dot in the window until I have completed a proper press-out. So I’m not able to calculate the variables of dot, press-out, target, and trigger press to coalesce at a single point. Instead, with the red-dot optic, I must complete the draw and press-out and THEN find and place the dot on my target, and THEN press the trigger to break the shot. The difference in time between the two approaches is quite small, but it is rather significant when we’re talking about milliseconds. From my little practice so far, my average time with the red-dot for the shot described earlier is around 1.7 seconds. That’s a difference of 30+ milliseconds (which could possibly be huge in a defense situation).

Last weekend I told one of my instructors about this quirk of the red-dot and he said, “Oh, you’re like a major-league hitter trying to hit a softball pitcher.” I looked at him like he was crazy. I had no idea what he meant.

So he went on to explain: it was some years ago, but women’s softball pitcher Jenny Finch faced 24 big-league baseball hitters and struck out all but one. Not no-name players, we’re talking the monster hitters of the MLB. Of the 24 hitters, only Scott Spezio managed to get a base hit off her. Her underhand-style pitch totally baffled them, and with good reason.

The technical keys here are reference to the fact that baseball hitters don’t follow the ball onto their bat—the ball is moving far too fast and often with far too much movement to gauge the proper point of impact by following the ball. Instead, they typically watch the pitcher’s mechanics and point of release to tell them what’s coming, how fast, and where the ball will end up. They’re performing a calculation based on the coalescence of a few factors.

So in my case, I’m the big-league hitter who is used to seeing certain elements and estimating the point of conversion. But with the red-dot, I’m unable to see the pitcher’s mechanics or point of release. I have to wait until the ball is at the plate before I swing (or just break the shot at the end of my press-out based on nothing recognizable for accuracy—not gonna do that).

His analogy makes perfect sense. Those baseball hitters had no relevant frame of reference to hit Jenny Finch’s underhand pitch. At best they had to make a snap guess (and only Spezio got lucky—yes it was pure luck).

Obviously, this is no bar to the red-dot, it’s just different in that it does not allow for any estimation before the sight picture is visible at the end of the press-out. But I chafe against this limitation; that quick estimation is a much-practiced component of my fundamental technique and it relates directly to my method of practice and measurable ability. But when it comes down to it, it merely changes my expectation. It’s something I could learn to live with. But I’m trying out the red-dot to see if I can prefer it to iron sights.

So the question is, will I decide to live with this limitation or decide not to. We’ll see.