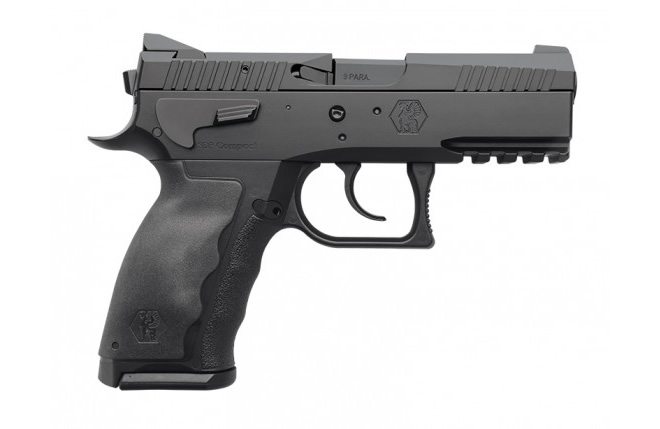 I’ve been seeing magazine ads for Sphinx pistols for years. As I’m a designer, the precise and beautiful lines and the soft luster of the finish on these pistols make me swoon just a bit. Sphinx compact pistols come in a variety of setups and color/material configurations and Eagle Gun Range has a couple of them. Recently I got the chance to spend some quality time with the Sphinx SDP Compact Alpha, chambered in 9mm.

After trying out the Sphinx, I didn’t want to give it back. It’s every bit as sexy as the ads led me to believe, yet it’s a very businesslike gun. Here are my thoughts and impressions of the pistol.

Why Consider The Sphinx SDP Compact?

While many pistols are made for specific purpose—duty, competition, concealed carry, deep concealment—the Sphinx SDP compact does not seem to me to fit snugly into just one of those categories. It is a highly accurate, precision-shooting machine and, therefore, fit for competition. However, it has a picatinny rail and a modest magazine capacity. It is moderately sized and so could be a concealed-carry candidate, yet it is quite heavy as compared to many carry guns.

The description on the Sphinx Arms website says, “Derived from competition and built for duty use, the SDP Compact is the ideal gun to suit your needs on the job, in the home, or in the shoot box.” I’d say that pretty much sums it up. Let’s take a closer look.

Lately I have been shooting and reviewing snappy little subcompact carry pistols. So when I picked up the Sphinx SDP compact and put the first few rounds through it, it was like climbing out of a go-cart and into a luxury sedan with bucket seats and a plush interior tailored just for me. This is a plush pistol.

Its precision machining, tight tolerances, and smooth-as-silk trigger help make this a highly accurate pistol. When starting de-cocked, that first trigger pull is long and heavy; around 10 pounds, but very smooth. Follow-up single-action pulls are in the 3 to 3.5 pound range and very smooth. There is a clean take-up and a clear wall, then a crisp break. Trigger reset is short and clean. This is a wonderful trigger.

Comfort & Controllability
This is a very comfortable gun. To me, it feels better in the hand than any pistol I remember holding. The rubberized and contoured backstraps of various dimensions allow you to configure the grip to suit your preference. I like how the Sphinx puts the palm swell in the proper place for the human hand: near the middle of the grip rather than at the bottom of the grip like Glock does. Also, it has rounded grip sides rather than flat, as typically found on most pistols. The result is a very ergonomic feel.

I find the Sphinx SDP Compact Alpha to be a very soft-shooting gun. When at the range to shoot the Sphinx, I typically warmed up with my Glock 19 so I could note key differences. I have never found the G19 to be at all snappy, but switching to the Sphinx was almost like going from a 9mm to a .22 pistol. That might be a slight exaggeration, but the felt recoil with the Sphinx is almost half that of the Glock 19! Like I said: plush.

With its soft recoil, follow-up shots are very easy to achieve accurately since the gun almost doesn’t move in the hand. My sights never really came off target during shooting strings. Certainly this low-recoil feature is due in part to the guns weight. It outweighs the G19 by at least 5-6 ounces (maybe more) and the fact that the upper part of the frame is made of aluminum rather than polymer.

The one comfort issue I had with the Sphinx is that when chambered and de-cocked, the reach to the trigger was exceedingly long. I even had to adjust my grip slightly to reach the trigger properly. I have medium-sized hands, so this may not be an issue for folks with larger hands. I found that first-round trigger reach to be uncomfortable and off putting.

Concealability + Capacity
Unloaded, the Sphinx SDP Compact Alpha weighs in excess of 28 ounces, which is comparable to a 1911 compact model. Being a double-stack, however, means that it’ll be considerably heavier than a compact 1911 with a fully-loaded magazine. This puts the Sphinx on the hefty side and perhaps not ideal for IWB concealed carry. Though I’ve heard some say they do use it for IWB concealed carry. In any case, its weigh makes an extra-stiff belt a requirement.

The Sphinx SDP Compact Alpha has a 15+1 capacity and yet is just barely small enough to be a compact-sized pistol. While only a smidgen larger than say a Glock 19, which has the same capacity, it is quite a bit heavier and the height/grip is about 1/3” taller than the G19. So while I wouldn’t exclude the Sphinx as a concealed-carry pistol it is perhaps better suited to OWB duty carry. At the least, its extra weight and slightly larger dimension than most compacts make the Sphinx more of a winter gun with regard to concealability (under heavier, cold-weather clothing).

I would imagine a pistol of this size might hold one or two more rounds than similar but smaller pistols. A saving grace, perhaps, is the fact that it’s a precision tack driver that might allow you to do more with those 15 rounds than with some other similar pistol.

The slide of the Sphinx is precision machined from billet steel, which is then treated to a TIAIN coating, and hand fitted to mate with the frame. The frame has an anodized aluminum upper, cut from billet. This aluminum upper is affixed to a polymer grip with three recessed screws (one at the front of the trigger guard and two at the rear of the grip), assisted by the magazine-catch screw that enters the front of the grip. I’ve never seen this sort of configuration before, but it’s interesting and a clever method for reducing the frame weight. The finish of both the steel slide and the aluminum frame is beautiful and, when clean, has a soft, satiny luster that exudes quality.

Above: How the aluminum frame mounts to the polymer grip.

The slide has quite a low profile, as it rides inside of the upper frame in full-length rails that are precision machined into both the slide and the frame. I don’t know if this configuration does anything for accuracy or reliability, but it sure seems like it would. As with everything else on this pistol, the finish is fine and the tolerances tight.

The comparatively shallow slide gives the Sphinx a lower bore axis, which helps mitigate felt recoil slightly. With so little slide available to the hand, it might be difficult to grip for racking if not for the sharply cut serrations fore and aft. These give good purchase and I never had a problem or felt like I needed more slide when racking it.

The steel sights include a white-dot front sight and a black rear sight. The dovetailed rear sight is serrated to eliminate reflection glare. I really like these sights when shooting, but I do not like the fact that the rear sight is smoothly angled from the slide level toward the back end. That ramp does not offer affordance for one-handed slide racking on, say, a belt. It can be done with enough pressure, but not as easily as with more of a flat front to the rear sight.

The grip is polymer and sports interchangeable backstraps. The three backstraps that come with the pistol allow for size variation on both horizontal dimensions (width and girth). They have a rubberized texture that is very grippy in dry hands. I never got the chance to shoot this one with wet hands, so I can’t say how the grip holds up in less-than-ideal conditions.

Pros
The Sphinx SDP Compact Alpha is a soft-shooting, highly accurate, precision shooting machine that feels wonderful in the hand. The trigger is fantastic and feels slick as grease in both double and single-action modes. The de-cocking mechanism is ambi and the magazine release is reversible. The slide-inside-the-frame rides on full-length rails and the fore-and-aft serrations are sharp and easy to grasp. The stock sights are good and the pistol is easy to field strip. With the precision machining, beautiful contours, and refined lines, the whole package looks quite sexy.

Cons
This pistol is heavier than some similarly sized competitors and its heft detracts from concealed-carry ease and comfort. As a duty pistol, the 15-round capacity is perhaps slightly anemic. In my opinion, external mechanisms detract from reliability, so the fact that this is a hammer-fired pistol with de-cocking levers is a strike against it in my book. The ~$1000 price will be a hard pill to swallow for many would-be buyers.

So for rating the Sphinx SDP Compact…

Ergonomics (*****)
It’s the most comfortable pistol I’ve ever held or shot.

Shootability (*****)
With great sights, soft recoil, and nice grip contours, it is very easy to shoot this compact pistol accurately and to hit with quick follow-up shots.

Reliability ()
I didn’t give the Sphinx a reliability score, as I only put a few hundred rounds through it and didn’t get the chance to shoot it wet or dirty. That said, I shot hundreds of ball ammo rounds and a couple dozen each of three different hollow-point defensive round varieties through it, and every round in cycled perfectly and went bang. I have not read of anyone having feeding or cycling issues with any particular type of ammo.

Customization (**)
The Sphinx SDP Compact Alpha is not the kind of gun one wants to customize much. Not surprisingly, there are few customizing accessories available. I was able to find some after-market sights (which I would recommend if this is to be your defensive gun). The interchangeable backstraps allow for some personal fit. The picatinny rail allows for flashlights and/or lasers and there are several holster options available from quality manufacturers.

This is a fantastic pistol. It definitely tends toward being a luxury gun and one I’d not want to see marred or dirty. Aesthetics aside, it is a very accurate and precision-machined pistol that means business. While its price is in the upper tier for duty/carry pistols, I can think of no reason to malign it on price. Its value is tangible and if you can afford it, it’s worth every bit of its price.

If you’re interested in shooting the Sphinx, that’s easily accomplished and quite cheaply, as Eagle Gun Range has an SDP Compact Alpha for rent. Be warned, though; if you rent it and shoot it you might not want to give it back.