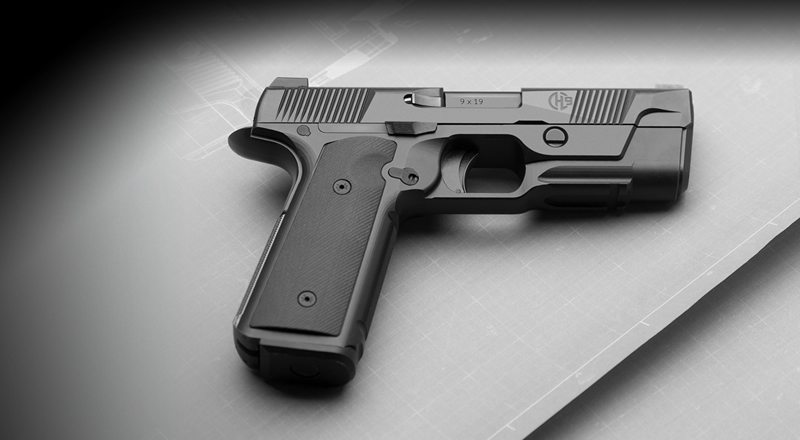 There is precious little innovation in the firearms industry. With few notable exceptions, just about any new pistol is little more than a cosmetic makeover of another. But sometimes a company makes a bold move and releases something truly new and different. The results may be good or not so good, but disruption is a worthy goal.

Hudson is a new gun company, founded by Cy and Lauren Hudson. Their first pistol is the Hudson H9 chambered in 9mm. It’s an interesting attempt at creating a pistol with 1911-style geometry, but in a low-bore, striker-fired package and without all the crummy external controls. It’s the kind of Frankenstein creation that many gun enthusiasts have wished for and joked about for years. The H9 would seem to be the first serious attempt at realizing this fantastical ideal.

The Hudson H9 is interesting and I mean that in both the positive and negative senses of the term. Being the first of its kind, it is due both thorough exploration and likely much criticism. That’s the nature of going first. Pioneers take plenty of arrows and after spending some time this month shooting the H9 I aim to shoot a few arrows myself.

Why Consider the Hudson H9?

As a first for me, and unlike every other review I’ve written, I’m going to suggest that one should consider the Hudson H9 almost exclusively for its novelty and not for any specific use purpose. I say this because I cannot think of a specific purpose this pistol serves beyond representing an interesting exploration of new configuration.

The H9 is likely too large and too heavy to serve well as a concealed-carry tool. Its oddly-shaped forward frame means that any rail accessory, like a flashlight or laser, will produce an awkward pistol to holster for duty carry. Otherwise, duty carry could be a relevant consideration for this pistol, but I say that with reservation: this pistol configuration is as yet unproven and perhaps not optimal. I note that given its weight, good sights, and flat-shooting traits, one possible employment could be as a stock competition gun. 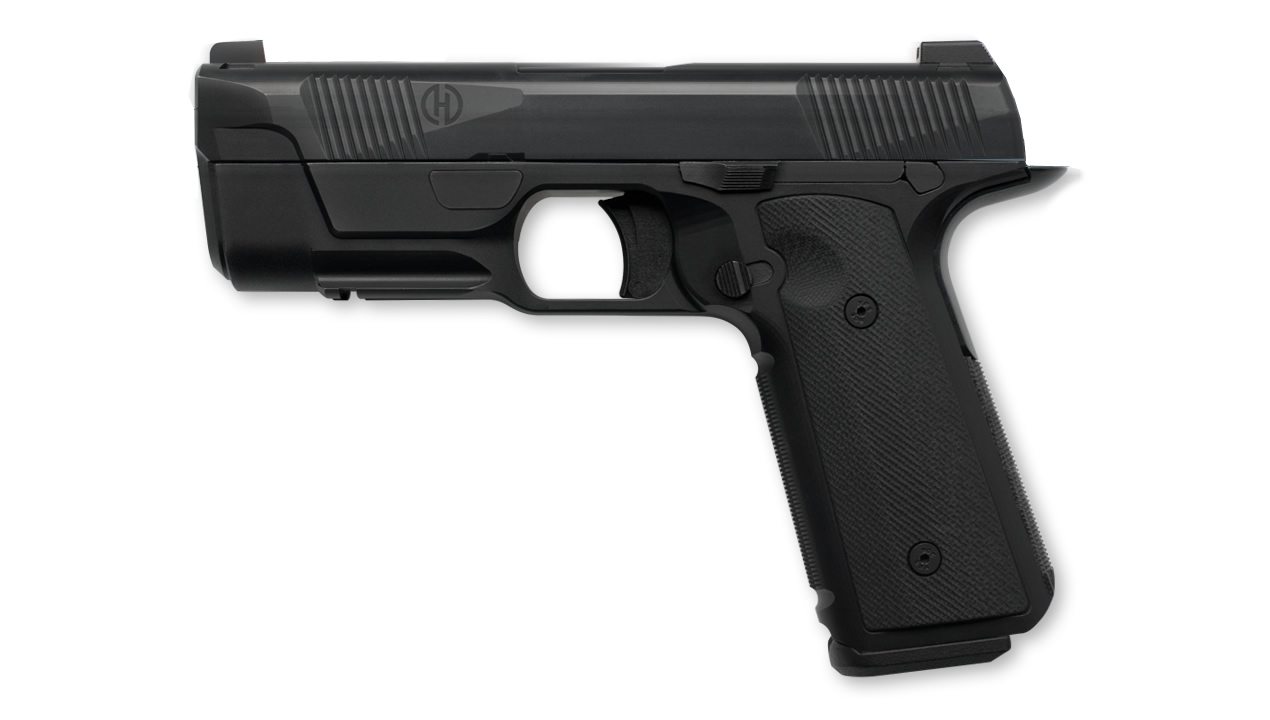 Before Shooting the Hudson H9

As there was a lot of buzz surrounding the H9 before it came to market, there was sure to be a lot of gossip about it after the fact. When talking to folks who had the chance to shoot it, and before I had that chance, almost to a man they told me that the H9 shoots low. The general consensus is that the front sight is too tall, resulting in a low point of impact vs. aim. I was therefore expecting to experience this same issue. As I’ll detail below, I did not…with an asterisk…

The Hudson website refers to their new pistol saying, “From its steel frame, to its straight-pull trigger, to its striker-fired design the H9 will feel instantly familiar to firearms enthusiasts.” I call false advertizing: there is nothing familiar feeling about shooting the H9. This is something different.

The recoil impulse is different. As compared to the 9mm 1911s I’ve shot, the recoil impulse is pretty strong. Having said that, there is very little muzzle flip with the H9 as compared to a 1911. I’ll attribute this to the deliberate and interesting placement of the recoil spring assembly, which rides low, inside the frame and just in front of the trigger guard. This lower placement of the recoil spring directs the impulse, in part, lower into your hand. However, the spring’s placement necessitates a shorter spring assembly, which allows for a bigger kick (I believe). 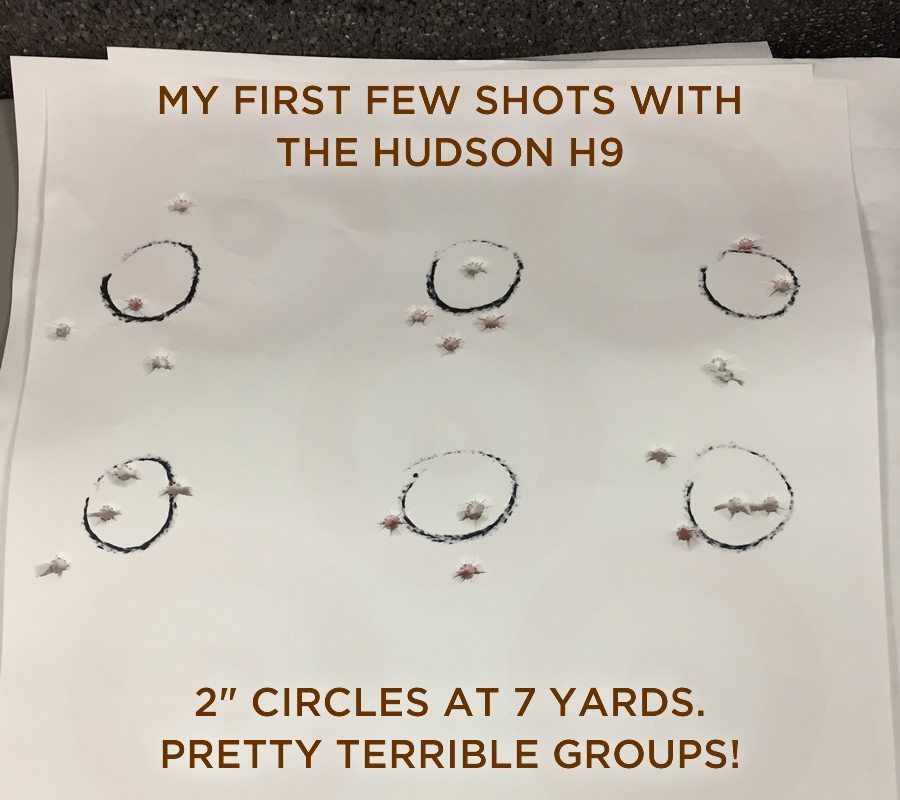 Right off the bat the pistol experienced a malfunction, as it failed to feed the first round of the first magazine when I slingshot the slide. I tapped the back of the slide and it went into battery, loading the first round. I saw no hiccups after that. My first shots were not consistent and I later attributed this inconsistent shot placement to the odd trigger construction and action. The H9’s trigger has a full-width shoe/safety that compresses upward, as it is hinged at the bottom. This action is unlike any other trigger on any pistol. The rest of the trigger press is, like that of a 1911, straight back. After the safety shoe takeup, there is very little travel before the crisp break. However, the odd, bottom-hinged safety action tends to result in an odd-feeling press action and perhaps compensatory hand manipulation. It is this odd mechanic to which I attribute the low hits so common to folks who have shot the Hudson H9. 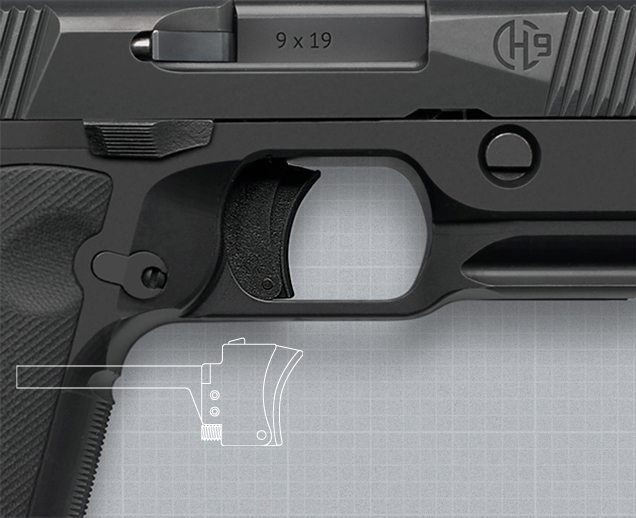 In short order I was able to correct my tendency to use a different press action and accuracy returned. I soon found the H9 to be as accurate as most pistols I’ve shot. Granted, I only took the H9 out to 15 yards, but I was able to get good groups while firing multiple shots at less-than-a-second intervals. The bright front sight certainly helps with mechanical accuracy. Note that I did not do any bench-rest shooting to test the true precision of the H9.

The grip of the Hudson H9 is chunkier than I imagined it would be. But after all, it is still a double-stack pistol. The lack of grip contour on the front and back makes this not a terribly comfortable gun to hold, but it’s not particularly uncomfortable either. My medium-sized hands could get decent purchase, but I felt like my trigger finger needed to be slightly longer. Perhaps this is something that smaller grip shells (something coming in the future) could mitigate.

One thing I don’t like about the H9 is the flat and slick forward frame. There is neither contour nor texture for the support-hand thumb to gain purchase to help manage the recoil motion. As a result, I got more muzzle flip than I wanted, but this is not a gun that has much muzzle flip in the first place so the result was not as bad as one might expect. I expect that the relatively low bore axis and lowered recoil spring location has something to do with this. The recoil is a bit stiff for such a heavy gun, but it is rather flat shooting and easy to get the excellent sights back on target immediately.

The slide lock mechanism is kind of touchy, resulting in the pistol going into battery most times when a new magazine is inserted. It also results in the slide slipping into battery when you gently set a cleared and open pistol down on the bench. This happened to me a few times. I’d prefer a surer locking mechanism. 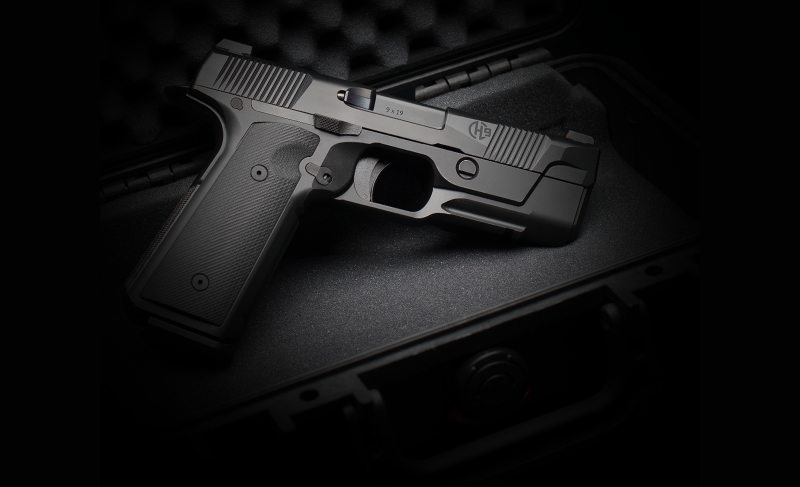 The Hudson H9’s frame is steel and the forward slide configuration is large, which makes for quite a heavy gun. The grip shells can eventually be replaced so one will soon be able to configure the size and texture to suit. As is, the gun is a bit slick and I would not want to run it in the rain or if I had sweaty or bloody hands.

As mentioned earlier, the trigger is an odd bird. The action is straight back, similar to a 1911 trigger. However, the first press movement is the finger closing the safety/shoe onto the trigger body. This safety is hinged at the bottom so the safety moves at the top rather than at the bottom, as all other trigger safeties work. The result is a trigger press that makes the Hudson H9 feel like no gun ever made. I believe this “upside down” feel is responsible for most folks shooting low with the H9. The trigger reset is very short and quite pleasing.

The sights are excellent. The rear is serrated and blacked out and the front is a Trijicon HD sight that is highly visible and certainly helps with proper aim when shooting. Both are dovetailed and one assumes replacements will eventually be available (though likely not necessary!).

I found the external controls to all be well located for my medium-sized hands. The reversible mag release and ambidextrous slide-lock controls will be a boon to some folks. The one component that I think is just poorly done is the slide serration. I don’t care about the front serrations, but the rear serrations are rather mild, shallow, and slick. I found it easy to miss my grip and fail to cycle the slide sometimes.

Pros
With its straight movement and short reset, the trigger is great to run during fast-string shooting. The sights are excellent and the overall aesthetic, the chunky nose aside, is handsome. The recoil impulse, while stiff, is not accompanied by much muzzle flip. The Hudson H9 is an interesting exploration of a concept. I give Hudson props for jumping in with both feet in this admirable effort.

Cons
Unfortunately, I think this gun is a solution to a problem that does not exist. The H9 does not approximate the soft-shooting action of a 9mm 1911. The grip lacks any ergonomic contours. The trigger, while having some good qualities, feels odd to engage and I believe this causes sympathetic hand manipulation during the press. The slide serrations are nowhere near aggressive enough. This is quite a heavy pistol and…it’ll cost you $1,200 bucks!

So for rating the Hudson H9…

Shootability (***)
The interesting trigger is not smooth enough and has a weird-feeling press that I believe compels inaccuracy. However, the gun stays relatively flat when firing and the stock sights are excellent. Ambi controls are in the right spots.

Ergonomics (***)
The Hudson H9 is not a very ergonomic pistol. The ambi controls are a plus, but the grip is like a shovel’s handle.

Accuracy (****)
I found the H9 to be hard to shoot accurately at first, but later found my groove. I’d say it’s as accurate as a Glock 17.

The Hudson H9 is a gun that someone needed to make. I called it a solution to a problem that does not exist, but it is the answer to a question many have had for a long time. I believe that Hudson did a pretty good job here, but there’s just too much that is not yet right, in my opinion. The concept may have legs, but Hudson needs to stretch them a bit before I’ll be sold on a gun like this. Designing toward a specific purpose would be a great next step. At present, this gun has no specific purpose for existing, beyond novelty.