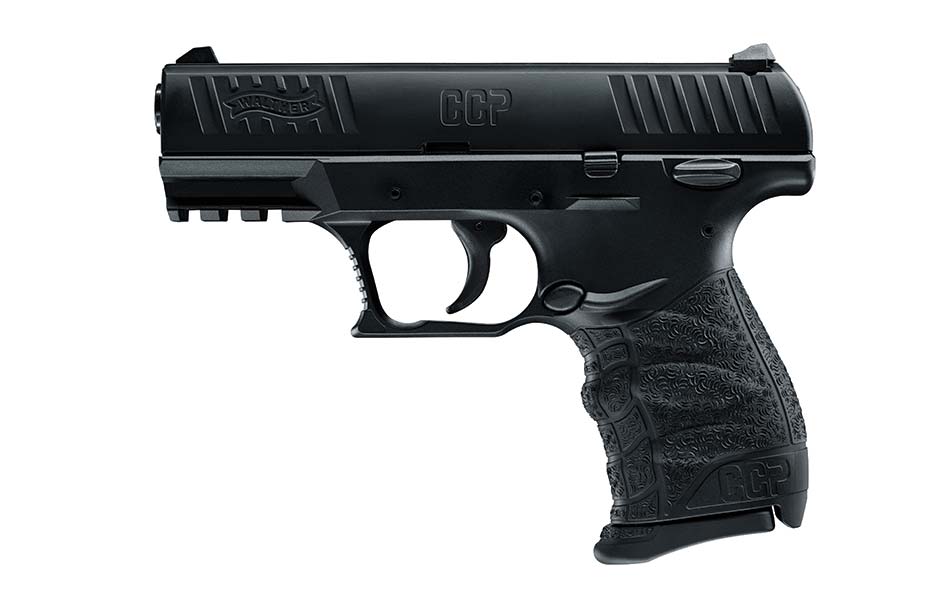 The Walther CCP—Concealed Carry Pistol—is a conundrum. It has some highly valuable and interesting features and some highly frustrating ones as well. It’s a wonderful shooter, so long as you don’t intend to shoot much with it (I’ll explain later). It’s exceedingly simple construction somehow results in an exceedingly difficult disassembly process. It is made specifically for concealed carry and yet it’s almost too big to easily conceal.

This is a strangely contradictory firearm and it deserves a closer look. I recently had the chance to spend some time with the Walther CCP on the range, putting a couple hundred rounds through it, and I both liked and disliked what I found. I wonder what you’ll think of it.

Why Consider the Walther CCP?

The qualities that should make you take notice of the CCP include its highly ergonomic grip design and the fact that it is a single stack, making it a bit more concealable than a similarly sized double stack model. The 8+1 capacity is one better than most of its competitors, but seems light with such a tall grip.

The CCP has a couple of interesting features, not the least of which is the fact that it has a fixed barrel and no slide rails! The barrel is fixed to the frame and does not move while firing. The slide moves back and forward over the barrel and the rear catch while a gas piston mechanism regulates the articulation. Interesting stuff!

As a purpose-built concealed-carry pistol, however, it’s sort of an odd bird. It is slightly taller than a Glock 19 and almost as heavy. It’s wider than many single stack compacts and the grip offers a full hand’s accommodation. So even though it’s made specifically for concealment, it is certainly not for deep concealment, as some single stacks are. Capacity aside, you’d expect some mitigating features as compensation. As we’ll see here, you’d be right (yet with one big downside)! But first, let’s look at the specifications. 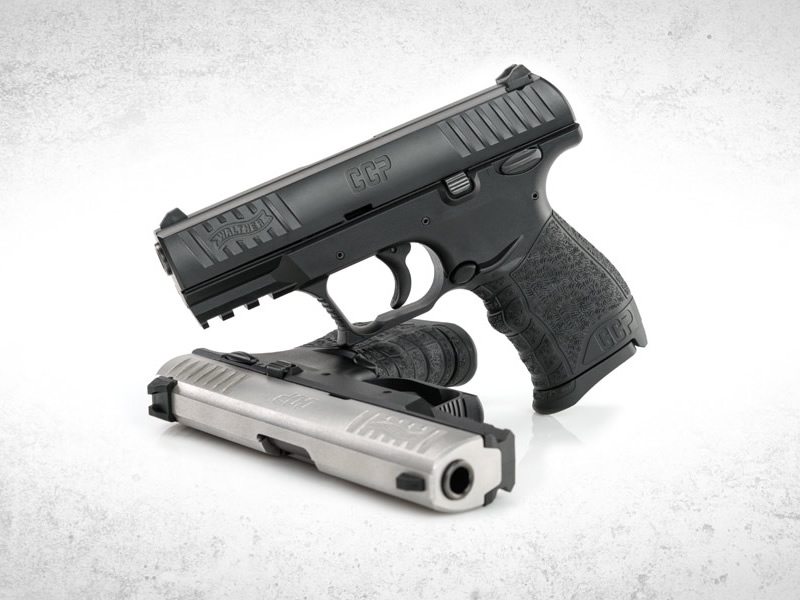 The Walther CCP is one of the more comfortable pistols I’ve ever held. The grip fit my hand like it was made for it. It was a joy to bring up on target. The first thing I notice after only ten shots or so was just how accurate this pistol is. All told, my groups were consistently smaller with the CCP than I’ve shot with any other pistol, at every distance from 3 to 15 yards. The barrel is shorter than that of a Glock 19, but despite the fact that I shoot my G19 several days/week, I was consistently more accurate with the Walther CCP.

The trigger is not great. The takeup is a bit long, almost like a single-action trigger. In the press you can feel a stuttering that feels like plastic rubbing on plastic. This is exacerbated by the length of the takeup. I also didn’t enjoy the loooonnng reset, which must go all the way out to its original position for the reset to engage.

I found the sights very easy to pick up, but the 3-dot sights on my CCP were bright white while I’ve seen pictures of other CCPs that had dull, gray dots. Dunno if this is a deliberate change on the part of Walther or just bad photos of those other pistols.

The big ding against the Walther CCP, in my opinion, is the fact that after 25 or so rounds, the front end of the frame is uncomfortably hot to the touch. After 75 rounds, I had to put on a glove, as I could not properly grip the pistol. This frame heating is an unfortunate result of the gas piston system. With each round’s gasses escaping into the piston chamber via a small hole in the bottom of the barrel, the heat builds up and pretty soon the gun is too hot for your support hand. I have to wonder if anyone at Walther shot more than 10 or 15 rounds through their gun during its development and testing!

Comfort, Controllability, & Capacity
This is a single-stack pistol so the grip should not be so comfortable. And yet, it’s among the more comfortable guns I’ve ever put into my hands. Walther did quite a good job creating the grip on this one, and that includes the grip texture. I have to note that after a few dozen shots, comfort wanes as the frame heats up.

Despite Walther’s claims of “softcoil technology,” I found the recoil to be pretty sharp. I tend to bear down hard with my grip and I had trouble keeping my support hand in place on fast shooting strings of 3 or more shots. The recoil wasn’t unmanageable, but it was more than I expected with such a large compact gun.

This is a shooting review, so I will not comment definitively on the CCP’s concealability. I will simply note that the single-stack aspect of the grip will aid in concealability while the overall height of the CCP’s grip will work against it. This is not a subcompact and, as noted before, the grip is a bit taller than even a Glock 19. The Walther CCP will likely not be the most concealable single stack you can find.

Despite the grip’s height, the 8+1 capacity is not bad for a single stack concealed-carry pistol, but perhaps low for one of this size.

The CCP looks like a well-contoured version of most polymer-framed pistols, but the similarities end there. This is quite a unique machine.

Due to the fixed barrel and gas piston system, the recoil spring on the CCP is not nearly as heavy as those on other pistols. This feature makes it very easy to rack the slide; a good fit for some women and the elderly, whose hands may not be strong enough to rack the slide on most pistols.

Field stripping the Walther CCP is, well, pretty ridiculous. This is a shooting review, so I did not have the opportunity to perform a field strip, but if you’re considering the CCP I encourage you to watch one of the many videos that demonstrate the take down. It requires a special tool (that comes with) and seems to very nearly require 3 hands to accomplish!

Unlike many modern pistols, the CCP has a thumb safety. The safety control lever is quite small as compared to most others and feels almost dainty. As safety controls go, this one seems well located and despite its small size it is not difficult to manipulate.

Pros
The Walther CCP is one of the most comfortable-to-hold pistols I’ve touched. The grip contours and quite nice and the texture makes this one of the only pistols you’ll find that doesn’t require skate tape or stippling. The fixed barrel and piston system make the CCP interesting and unique. Perhaps most importantly, I find this pistol to be incredibly easy to shoot accurately.

Cons
The CCP is quite heavy and large for a single stack, 8+1-capacity compact pistol. The felt recoil is significant. The trigger, at least out of the box, has an odd takeup texture and a long reset. Field stripping the CCP is strange and difficult. Perhaps the biggest knock against it is the fact that after 70+ rounds, the gas piston system heats the upper frame to 150-200F degrees (as proven in at least one review video), rendering it impossible to grip properly. I have to wonder if repeated heating will weaken the frame materials.

So for rating the Walther CCP…

Ergonomics (*****)
The grip is sooo very comfortable and the controls are in the right place for my medium-sized hands.

Shootability (****)
With such a comfortable and accurate pistol, the only knocks against the CCP I could suggest are the sharp felt recoil and the inability for one to properly place the support hand on the frame after 50 or so shots (owing to heat buildup). These issues aside, it’s an eminently shootable pistol.

Accuracy (*****)
So very accurate for a short-barreled pistol!

Reliability ( )
Can’t score this one, as I only put a couple hundred rounds though the CCP. In that short time, though, I experienced no malfunctions or hiccups.

I have to admit I’m greatly torn considering the Walther CCP. The ergonomics, excellent grip texture, fixed barrel design, and easy accuracy make me WANT. The strange trigger and frame-heating issue give me serious pause. It’s such an interesting firearm that does what it’s supposed to do, which I think makes it well worth consideration.

I highly recommend that you rent this pistol and try it out for yourself. I bet you’ll be at least partly impressed.